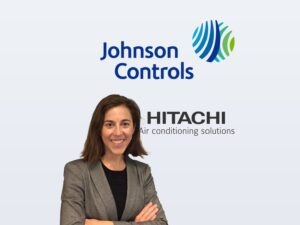 Johnson Controls-Hitachi Air Conditioning appointed Blanca Sebastia as vice president and general manager of its European Business Unit. She reports to Enrique Flórez who has been serving an expanded role as vice president and general manager of Europe, North America and Latin America. Blanca Sebastia will lead the team in Europe with the aim for sustainable growth in the region, basing on a strong strategy built on the foundation of an overarching vision, ensuring a world-class customer centric service, promoting excellence in sales channel management and operations throughout the whole product lifecycle. In this sense, the company counts on the manufacturing facility located in Spain, where Hitachi Cooling & Heating products are developed with focus on European customer future needs and manufactured according to the highest quality controls and standards. Most recently, Blanca Sebastia was director of sales operations for Europe at Johnson Controls-Hitachi Air Conditioning since 2016, driving operational excellence in the region. She has been an active part in strategic projects for the company in Europe. She joined Johnson Controls in 2006 where she fast tracked her career in finance, audit and later on an international assignment as chief financial officer of Latin America. She gained expertise in business transformation, consulting and transactional services at Ernst & Young prior to joining Johnson Controls.

Changes in the corporate governance of Polti