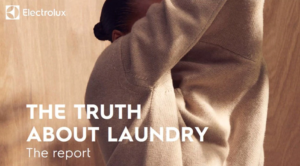 According to “The Truth About Laundry” (European study of laundry habits from Electrolux, with 12,000 adults surveyed), despite over a decade of being encouraged to wash clothes at 30°C or lower, nearly two thirds of Europeans (63%) still wash at 40°C or higher. As part of its Better Living Program, Electrolux has bold sustainability targets in clothing care with the aim to make clothes last twice as long with half the environmental impact by 2030. To help achieve these targets, the survey was conducted to understand current attitudes and behaviors when it comes to how people care for their clothes, and to what extent people consider the environment. The survey finds that laundry habits are out of step with climate concerns and modern capabilities. Nearly six out of ten people (59%) are more or less on auto-pilot when it comes to washing clothes, stating they do the laundry the way they were taught to by previous generations. The report includes detailed analysis to show that reducing wash temperature from 40°C to 30°C would save over 27kg of CO2 equivalent, per household, per year. Across Europe that would equate to an equivalent saving of 4.9m tonnes of CO2, the same as removing over one million cars from the road. If the 15% of households across Europe that regularly wash their clothes at 50°C or higher were also to change, the total equivalent CO2 saving could be as high as 6m tonnes a year. When it comes to washing temperatures, gender appears to play a part but is not as significant as the influence of age. Women, for example, are more likely to wash at 40°C than men (50% vs 45%), and men are more likely to wash at 60°C (13% vs 8%). However, across Europe, 45% of adults aged 18 to 34 wash their clothes at 30°C versus only 31% of 45 to 54 year olds and only 28% of 55+ year olds. As for the main reasons why more people don’t choose to wash at lower temperatures, nearly half (47%) said they weren’t confident their laundry would be clean. 39% voiced particular concerns over the ability of a colder wash to remove stains and 21% said it was purely out of habit. Habitual laundry practices might also explain why over half of all adults (53%) are unaware of a link between washing at higher temperatures and making clothes last longer. The reason why this is important, according to the research, is that the key to changing laundry habits for the good of planet, could rest in turning the conversation towards fashion.