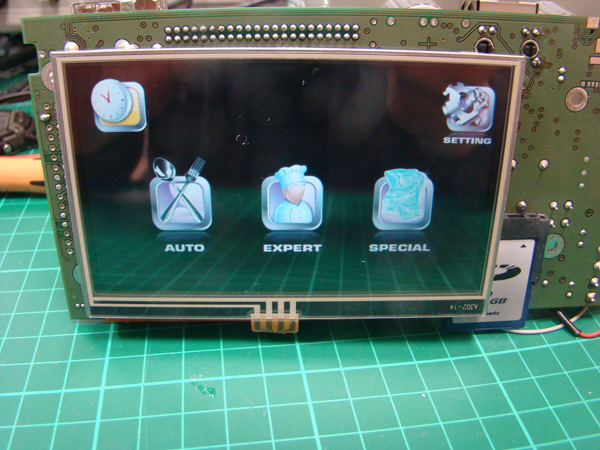 Distinguishing sign of Nardi TFT Second Generation oven is the interactive screen and the Wi-Fi connection. Two peculiarities that allow uploading on the oven and directly from the home PC both customized recipes with cooking programmes defined by the user and one’s own photos to run as a screen saver.

1) THE IDEA
With the TFT Second Generation oven, Nardi Elettrodomestici intends to bring into the kitchens the same interfaces that are transforming the digital communication world.

2) THE CONCEPT DESIGN
The starting brief for Nardi Experimental Centre was to develop an oven whose control was possible through a TFT screen. An idea that has matured both thanks to the availability on the market of components able to satisfy this demand and due to the diffusion of consumer electronics products where touch controls prevail.

3) ENGINEERING
The main implantation challenge was the choice of a touch screen suitable for an oven. The primary requirement consisted in the possibility of easily housing it in the dashboard of the appliance and of assuring sufficient useful space for the visualization and management of functions.

4) MATERIALS AND PRODUCTION
The aesthetics of the oven is realized with cold formed steel and crystal upon design on tempered glass: two materials that satisfy the precise aesthetical-functional requests of the market. The oven is produced in two versions, one with simplified functions, the other with all the options and pluses currently available on the market.

THE idea
The idea of the interconnected house where the household appliances dialogue with the net through the Wi-Fi connection and can be controlled also in remote by the smartphone, is one of the guidelines that most attract the household appliance industry. Nardi Elettrodomestici is clearly moving towards this direction. With the TFT Second Generation oven, in fact, the company intends to bring into the kitchens the same interfaces that are transforming the digital communication world. The big multitasking display is undoubtedly the characterizing element of the TFT oven. Positioned in the upper part of the oven, it replaces pushbuttons and knobs and allows the complete management of all functions, obviously starting from the choice of the cooking programme.  “The idea – explains Fabio Nardi – was born from the analysis of the sector developments that required more and more technological and attractive solutions “.The will of approaching digital technologies was favoured also “by the increasingly accessible prices of complex components such as TFT screens” further explains the manager.

Il concept design
The starting brief at which has worked the Laboratory of Ideas of Nardi Experimental Centre was to develop an oven whose control was possible through a TFT screen. “As already said, the idea has matured both thanks to the availability on the market of components able to satisfy our demands and due to the diffusion of consumer electronics products where touch controls prevail. The intuition was right – affirms Fabio Nardi – because, few months after the launch of our product, several of our competitors created similar solutions “.
The team of the Laboratory of Ideas of the Experimental Centre, in strict collaboration with the supplier of electronics chosen by Nardi, has outlined the base functions that the oven was expected to contain. “We afterwards identified a range of extra programmes that might be introduced – goes on the manager. – With these base functions we started devising the optimal arrangement of icons, the screens, the transitions and the menus, trying to eliminate as much as possible superfluous steps and complicated sub-menus “. Once reached the best result in terms of graphic arrangements of contents, the control system was loaded with standard and automatic programmes. “The procedures to set functions, temperatures and cooking times were reviewed several times until when we found the simplest and most immediate solution for us “.

ENGINEERING
The first implementation challenge aroused in the choice of a touch screen that might be suitable for an oven. “The main requirement – explains the manager – consisted just in the possibility of housing it easily in our dashboard and of granting useful space for the visualization and the management of functions “. Besides, the screen would constitute a component easy to find. “Built-in ovens, in fact, cannot follow the life cycle of tailor-made components for the market of mobile phones that, for instance, after few months, become obsolete. It was therefore necessary a component available for several years” in order to comply with the life cycle of the appliance. Hence the choice of the TFT screen that today is mainly used on navigation systems.
Electronics, then, would be housed in a different context from that for which it was born and where really “extreme” conditions prevail: in the oven, in fact, temperatures and wetness may jeopardize the screen functionality. “Therefore, we have studied an almost hermetic protection system of electronics and a cooling system able to guarantee the perfect operation even when the oven is functioning at the highest temperature for long time”.
Finally, the greatest challenge was the software. In the case of the TFT oven, in fact, it was just the software ergonomics that drove design choices. “The TFT screen- explains Fabio Nardi – represented a white sheet with which, unlike standard mechanical ovens where the road is more or less traced, we could indulge in terms of both functions, graphics and complexity “.After making many attempts “at the table”, the choice was to create the simplest and most direct possible interface. “If we consider the products available on the market, we can notice the difficulties that emerge with interfaces having menus, sub-menus, and sometimes phrases or words that cannot be immediately recognized “. Hence the solution of drastically limiting the text use and of making the user interact with icons and drawings of easy interpretation. The devising of icons and of graphic elements was a crucial work on which the whole concept success has depended.
“The menu has been subdivided into three main areas: automatic programmes, manual programming and “special” programmes – explains Fabio Nardi. – The oven was then sampled and “tested” by targets of different nationality to assess the universality of the interface”. The few texts that guide the user have been translated and they will be increasingly completed by others as the product gradually reaches new markets.
Another big problem that appears in the implementation phase when you work with electronic components is temperature. “Electronic components, in fact, to be able to go on operating correctly, must not exceed a certain threshold of temperature and this is not easy, being an oven that must just heat “. For this reason the design team of Nardi has modified the internal cover of the dashboard, in order to avoid both heat and the possible formation of condensate, and has boosted the tangential ventilation of the oven in order to grand utmost safety to the user and, at the same time, optimal operation temperatures for electronics.
Other critical components of the oven are the visual card with the whole control electronics and the power card. “These are in fact pre-assembled – explains Fabio Nardi – tested and calibrated before reaching the factory, so that in the production line the assembly is then carried out in “plug and play” modality.
As far as the external design is concerned, the oven stands out for the elegant opening without handle, for which, together with the supplier, Nardi has developed a new type of hinge cushioned and calibrated specifically according to the door weight. “We have tested several solutions until when we have achieved the effect of slow-downed opening after the door release” explains Fabio Nardi.
In terms of performances, the use of electronic probes and cutting-edge software allowed the producer to grant a very precise regulation of the inner temperature for the appliance. “A result that we have attained after measuring the thermal performances of the oven and consequently calibrating the probe, testing all the variants to create the most precise possible product”.

Materials and production
The oven aesthetic is made of cold formed steel and crystal manufactured upon design on tempered glass: two materials that satisfy the precise aesthetical-functional requests of the market. “Until now we have produced two different models – explains the manager – one with opening without stainless steel (FEX65T70) handle followed by the all-crystal version with traditional opening with handle (FEX47T70). The first model was proposed by introducing all possible pluses available at the time, while the successive solutions show some extras less” in order to meet also the average purchase target. “The first version of the TFT oven is purposely simplified and relatively scarcely multimedia – specifies Fabio Nardi. – This to allow our R&D to focus first on the main oven function, which is cooking. There are, in fact, lots of ovens that have numerous “playful” or superfluous functions that do not confer real added value to the oven “. For this reason in the successive version of the TFT (TFT Second Generation) model the company studied the addition of few multimedia functions that have been anyway deemed of sure interest for the user, such as for instance the Wi-Fi connection, the customizable cookbook, the screen saver that can be loaded with photos and images drawn form the home PC. The choice of these functions stems “from the experience that the TFT oven of first generation gave us and from the study of the oven use by our users. In particular, the connection with the Wi-Fi network will allow us to offer in the future a more and more suitable customization for each single user” states the manager.

FINAL RESULT
The winning feature of the product is its immediacy. “Even if it is an oven with forefront technology, a single use is enough for succeeding in understanding its control” explains Fabio Nardi. “Unlike similar ovens from our competitors, we have focused on the functions that are really useful for the end user, purposely eliminating useless additions that often risk of confusing users instead of helping them “.
Concerning the cleaning and maintenance procedures of the product, the Nardi team has studied a design aimed at simplifying the whole, making handles and knobs disappear, being the main points where food residues generally remain. The oven, moreover, is available with steel finish with anti-stain finish or in crystal: both are materials with not only great aesthetical effect but especially easy to clean. Finally “The cooking cavity, like all of our ovens, uses the easy to clean enamel that resists to dirtiness better than standard enamels” ends Fabio Nardi.