Data published by GfK Temax on technical consumer goods in France showed that the revenue generated was €8.7 billion in the fourth quarter of 2014, a decline of 2.4%, compared to Q4 2013. The telecommunications sector reported the most dynamic growth (up by 8.8%). The small and major domestic appliances sectors kept on growing (up by 1.7% and 1.2% respectively). The steepest decline in the fourth quarter was registered by the office equipment and consumables sector (down by 21.3%), followed by photography which declined by 17.9%.

Major domestic appliances: a good fourth quarter after a solid year
The MDA sector continued to grow in Q4 2014, with the market for free-standing products being more dynamic than that for built-in categories. However, the average price continued to fall in both segments. Front-loading washing machines, No frost bottom-mounted refrigerators, and heat-pump tumble dryers remained the biggest contributing segments to growth in the major domestic appliances sector in France. Together, they accounted for 75% of turnover in this sector. Built-in markets grew at a slower rate because of difficulties faced by kitchen specialists and traditional sales channels, but they are still very prominent in the specialist technical superstores, and on the internet. 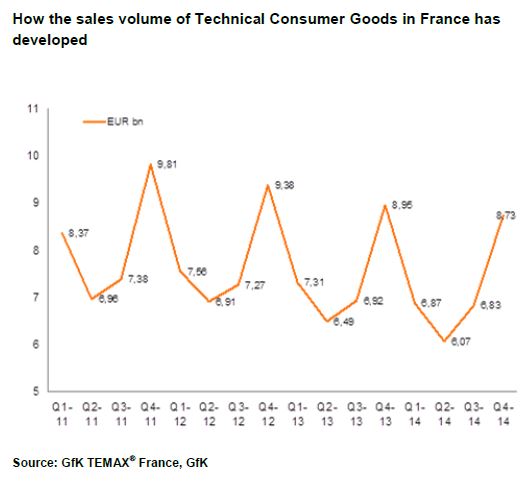 Small domestic appliances: 2014 positive trends strengthened in Q4
Personal care products was a very strong segment in Q4 2014. There was a strong recovery in the men’s shavers segment. Intense pulsed light (IPL) products and beard trimmers remained the biggest growth drivers, along with hair care products. The food preparation equipment segment was supported firstly, by important innovations in heating robots, and secondly by the increases in the kitchen machines segment. Deep fryers, principally the classical and professional segments, continued to recover in this period. Draught systems and kettles increased significantly in Q4 2014. The coffee machines market declined further in Q4 because of the fall in single serve machines sold. Also, some promotions offered in Q4 2013 were not renewed, which contributed to this fall. Sales of ironing products continued to move at a snail’s pace, hampered mainly by the generators. The implementation of the EU Energy Label on cylinders, growth in the handsticks segment, and the development of premium offers on robotic vacuum cleaners created value in this segment in Q4, with steady unit sales and a rise in value of 6%.

Consumer electronics: a disappointing fourth quarter after a promising year
Unfortunately, the last quarter of 2014 was not as good as Q4 2013. The volume remained flat, down by 0.4%, compared to Q4 2013. In December, a small decrease of 1.3% was recorded. The value is more disappointing, with a fall of 6.9% in Q4. This was due to a drop in the average prices of UHD TVs which were almost €1,000 less than they were six months ago. With a decrease of just under 1.8% in Q4 2014, the AHS market once again managed to slow down its decrease. Important disparities remained with a massive slowdown for home theater systems (down by 29%), combined with growing success for connected hi-fi systems – including multi-room products – up by 76% in Q4 2014. Soundbars continued to report massive success and ended the year with a growth of 35% in terms of revenue.

Photography: a tough end of year for this market
The digital still cameras market in France suffered in the last quarter of 2014. However, the turnover generated during this period showed more resilience, thanks to an average sales price increase of 10%, compared to the fourth quarter in 2013. All types of cameras were affected by this upscale. However, digital compact cameras and the compact system cameras stood out the most.

Information technology: the decrease of the market slowed
After a strong fall in Q4 2013 (down by 11%), the IT market decreased by 7% in Q4 2014. However, this trend was not reflected in every segment in the sector. Mediatablets suffered the biggest drop (down by 26%) because of weakening promotional activity. The mobile computing segment flattened, thanks to growth in the sales of portable PCs – driven by the rise of entry-level models – and a boom in sales of PC tablets whose stock has risen since the last ‘back to school’ period. On the other hand, the fall in sales of desktop PCs was less severe than in 2013, which explains the stability in the monitors market. The development of gaming is another major trend which benefited the premium end of the PCs segment. These improvements also extended to sales of mice and keyboards. Finally, other peripherals profited from new consumer behaviors. Indeed, Network Attached Storage (NAS) – also called ‘personal cloud’ – answered consumers’ needs for massive data storage and grew by 11%. Netcams, power lines and Wi-Fi repeaters also participated in the smart home revolution.

Telecommunications: turnover of devices increased in Q4 2014
The telecommunication sector’s turnover increased by 8.8% in Q4 2014, compared to Q4 2013. There was no growth in the smartphones segment during Q3, but a noticeable increase was seen in volume and in value (up by 12%) in Q4. This was mostly due to the launch of new high-end devices and a tendency to buy premium phones – a trend that was more apparent at the end of the year. Accessories followed this growth with an increase of 25% in value compared to Q4 of last year. This increase was driven by the headphones, cases, and the power packs segments.

Office equipment and consumables: 2014 ended in decline
The sector finished the year with a double-digit decrease when compared to Q4 2013, and a turnover of €468 million. Falls were reported in all product categories, with the exception of scanners. However, disparities existed depending on the sales channels. In fact, consumer channels managed to limit the decline better than the business channels did. Printing devices continued to decline in Q4 2014 – especially the laser printers segment. This trend created a negative impact on the consumables market with both laser and inkjet cartridges posting declines. Despite this gloomy trend, scanners registered very good sales, boosted by the strong performance of document scanners.