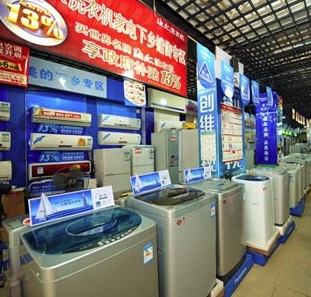 Technical consumer goods market in China increased by 5% in the last quarter of 2014 compared to the same quarter in 2013. According to the data released by GfK Temax, the small domestic appliances sector still ranked at the top, with an increase of 27.5% compared to the same period in 2013. Because of the large sales volume of Iphone, the telecommunications sector increased by 15.6% compared to Q4 2013. The major domestic appliances and office equipment and consumables sectors followed, with an increase of 1.7% and 0.9% over the results for Q4 2013 respectively. The IT and CE continued declining with drops of 6% and 11.7%. Besides, the photography sector declined sharply by 25.3% against Q4 2013.

Small Domestic Appliances*: development of online market
The total sales value of the SDA market in the Q4 of 2014 was ¥12.56 billion with a 27.5% increase compared to Q4 in 2013. The sales value of SDA in online market surpassed offline market. The juicer extractors segment experienced products upgrading: traditional centrifugal juicers were gradually being replaced by masticating juicers which also pushed the average price higher. In the air purifier segment, the growth was smaller. The shaver segment also grew more slowly than the previous three quarters of 2014 due to market saturation. 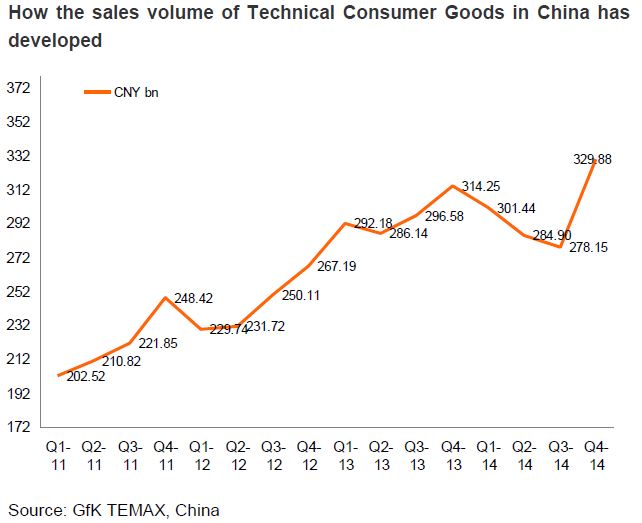 Major domestic appliances*: sales were impacted by housing slump
The total sales value of the MDA market in Q4 2014 was ¥41.63 billion with a 1.7% increase compared to the same period in 2013. Impacted by housing slump, the growth of the market slowed down. In the refrigerators segment, multi-door and side by side products were attractive for consumers. In the washing machines segment, prices of drum machines with inverter continued to decrease while in the microwave ovens segment, manufacturers focused more on developing multi-functionality on lower-price products.

Telecommunications: the overall market rose again with increased share of 4G mobile phone
The telecommunication market recorded a 15.6% increase in the last quarter in 2014 compared to the same period in 2013. The total sales value reached ¥171.24 billion. The remarkable growth in sales value was mainly caused by the high price of Apple’s new products in the last quarter despite stable number of units sold. By contrast, the lower cost of the 4G chip and competition among manufacturers lowered the price of 4G mobile phones.

Office equipment and consumables: total market remained stable
The total sales value of the OE market was ¥4.15 billion in the fourth quarter of 2014, an increase of 0.9% compared to the same period in 2013. Although the offline market for printers shrank influenced by the growing online market, the total market performance was stable in the last quarter of 2014. Multi-functional devices developed better than single-function products, and ink-jet printers performed better than laser printers.

Information technology: negative performance in the overall market
In Q4 2014, the overall sales value in the IT sector reached ¥49.17 billion, a decrease of 6% compared with the same period in the previous year. In the tablet market, products made by Huawei and MI had outstanding sales figures. Some mobile manufacturers joined the competition in the tablet market, making the competition in the low-price segment fiercer. Influenced by Apple, the development of tablet market included not only tablet itself but also the related products. In the laptops market, manufacturers focused more on products with large screens because of the popularity of laptops for gaming in the second half of the year. As for the desktop computers market, the shrinking of the total retail market slowed down.

Consumer electronics: the overall performance was worse than expected
The total market sales value of the CE market was ¥46.48 billion in the fourth quarter of 2014 with an 11.7% decrease compared to the same period in the previous year. The sales value of flat-screen TVs experienced a great fall in the fourth quarter, and the overall performance was therefore worse than expected. External factors like weak macroeconomics and the housing slump had a big impact on consumption. Other factors (further decline of LCDs average price, failure to embrace new technologies) also influenced sales. The development of the flat-screen TVs market still has many difficulties to overcome.

Photography: the market fall decreased
The total sales value in the photography market was ¥4.66 billion with a fall of 25.3% compared to the same period in 2013. However, the fall of China digital cameras market is slowing. On one hand, the single-function compact cameras segment shrank to a relatively small part in the whole digital cameras market that was unable to cause big changes in the market. On the other hand, middle and high-end products experienced an upgrading that caught more attention from consumers. Driven by middle and high-end products, the fall in the digital cameras market is gradually slowing.

* Data related to air conditioning products have been excluded from the SDA and MDA results. GfK China started tracking new SDA products as of Q1 2011.