According to GfK Temax, in the second quarter 2015 the Greek technical consumer goods market closed at 456 million euro, an increase of 12.1% compared to Q2 2014. The Greek market has showed four of the seven sectors reporting improved performances, and two of them – telecommunications and major domestic appliances – growing at double-digit rates. On the other hand, the photography, consumer electronics and office equipment and consumables sectors declined at double-digit rates.

Major domestic appliances
The major domestic appliances sector sustained its positive performance for the second quarter of 2015. More specifically, there was a significant increase in the washing machines segment as the desired drum capacity increased to 9 kg. In addition, tumble dryers reported an increasingly positive performance, while maintaining average prices at high levels. The built-in segment, following a long period of poor performance, remained stable with attractive average prices. 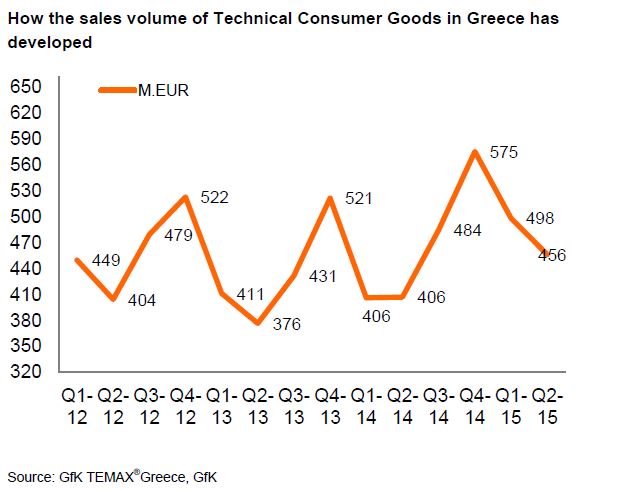 Small domestic appliances
The small domestic appliances sector recorded growth, continuing the positive trend from the beginning of the year. For the second quarter, most of the categories recorded growth in terms of value. In the personal care segment, growing segments included electric toothbrushes and hair clippers. Other categories including kettles, toasters, juicers and personal scales registered growth. This is part of a trend for consumers who eat more healthily and who prefer products that improve their quality of life.

Information technology
The completion of the Digital Solidarity program at the end of June led to increases in sales of mediatablets and mobile PCs. It is worth mentioning that in both categories the increase was lower in Q2 2015, compared to the results in Q1 2015 when the program started. Moreover, average selling prices remained rather stable for mediatablets but prices fell in the mobile computing products segment. In addition, sales value grew for keying devices as well as for visual cameras.

Office equipment and consumables
Following several consecutive quarters of increasing growth, the sector registered a decline in Q2 2015 compared to Q2 2014. Both the multifunctional devices (MFDs) and printers segments contributed to this. An important factor in the sector’s performance was the continuing fall in prices in both categories, with MFDs recording a higher and double-digit level decline.

Photography
The photography sector registered a double-digit decline for another quarter. The performance of the changeable lenses segment is worthy of note. The increase in value of this segment has slowed from quarter to quarter, a trend that was more apparent at the end of Q2 2015.

Telecommunications
In Q2 2015, consumers’ demand for smartphones in the higher average price ranges led to a significant increase in the segment, compared to the same period in 2014. To put this in context, in the first half of 2014 the mobiles and smartphones markets were at the lowest levels they had been for some time. Regarding the rest of the categories, headsets benefited from the outstanding performance of smartphones and maintained their positive trend. On the other hand, mobile phone devices recorded a double-digit decline after several positive quarters.

Consumer electronics
The CE sector registered a declining trend following a drop in revenues for panel TVs. This was largely due to a comparison with June 2014 when the FIFA World Cup was played, resulting in a significant growth of total sales. On the other hand, there was an improvement in the video games consoles, camcorders, loudspeakers and soundbars segments, as well as for memory cards and USBs.