According to the ZVEI Business Cycle Report (October edition), in August of this year new orders in the German electrical and electronic industry have increased with the same rate as in July. In total they once again rose by 6.5% (year over year). Domestic and foreign orders picked up by 4.8% and 7.8% in August, respectively. Bookings from euro zone customers exceeded their pre-year level by 13.9%, and new orders from third countries were 4.5% up. In the full period from January to August 2015 overall bookings were 6.4% higher than they were a year ago. Here domestic orders have increased moderately by 1.1%, whereas foreign bookings grew significantly more strongly by 11.2%. Euro zone clients raised their orders by 7.5% compared to the first eight months of last year. Bookings by customers from non-euro area countries even soared by 13.4%. 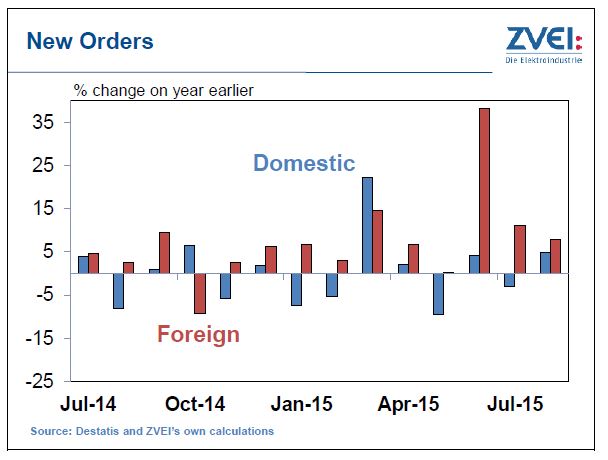 Production
Production – adjusted for price – of the domestic E&E industry’s companies has failed its pre-year level by 1.4% in August 2015. Accumulated from January through August of this year output was merely 0.3% up on its pre-year level. For some time now the sector’s production activity has been moving only sideways. However, the firms’ production plans have – on balance – been lifted again in September of this year. Hence, 20% of the companies plan to increase their output in the next three months to come. 73% intend to maintain their current production level, and only 7% want to curb it. 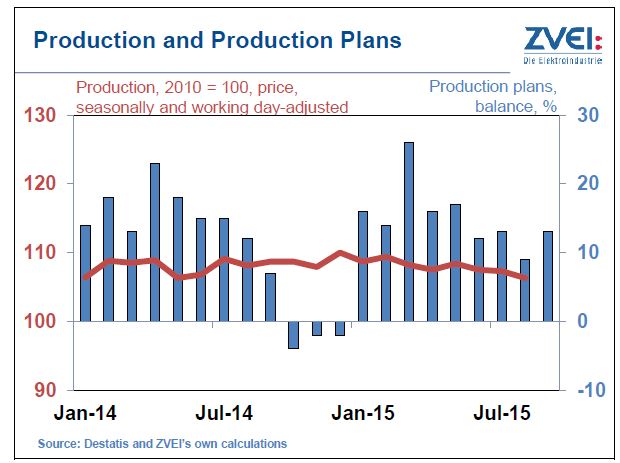 Turnover
With 13.4 billion euro, sales of the German E&E industry’s companies were 2.7% up on their pre-year level in August 2015. Domestic sales, however, grew only slightly by 1.6% to 6.6 billion, whereas foreign sales picked up more than twice as strongly by 4% to 6.8 billion. With it, turnover with clients in the euro area and in third countries increased by 4.2% (to 2.4 billion euro) and 3.9% (to 4.4 billion euro), respectively. In the first eight months of this year the sector’s sales came to 114.5 billion and, therewith, exceeded their pre-year level by 3.7%. Here a decrease in domestic turnover by 0.7% to 55.2 billion euro and an increase in foreign turnover by 7.8% to 59.3 billion have faced each other. Sales to euro zone customers (+10.5% to 22.0 billion euro) rose more strongly than sales to third countries (+6.3% to 37.3 billion euro). 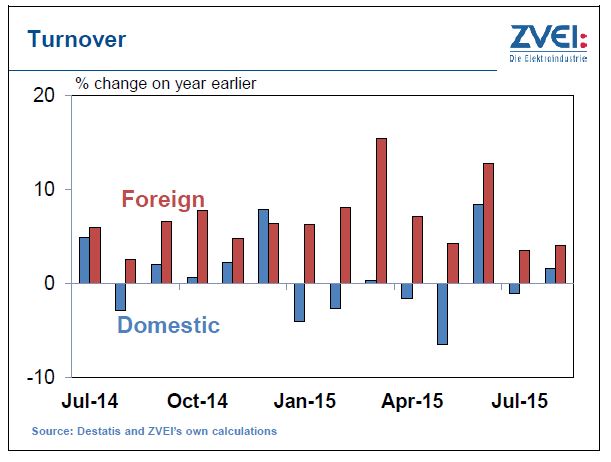 Business climate
The business climate in the German E&E industry has been on the decline in September. The companies’ assessment of their current economic situation fell slightly compared to the prior month. However, the expectations for the next six months to come declined more strongly. 35% of the sector’s firms now evaluate their present situation as good, 53% as stable and 12% as bad. At the same time, 19% of the companies reckon with rising, 70% with steady and 11% with decreasing affairs in the coming six months. 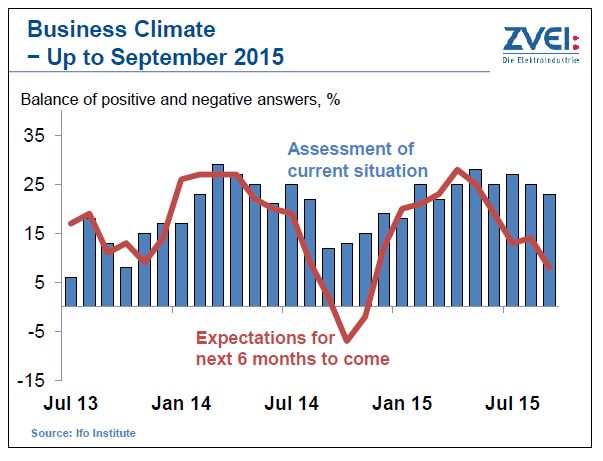