Zvei, the German electrical and electronic manufacturers’ association, has published its “Business Cycle Report” (February edition). The last available data show that orders, production and turnuver have increased in December 2015 compared to the same period of 2014. Here are the figures in detail and the expectations for 2016.

New orders
In December 2015 the German electrical and electronic industry has received 7.4% more new orders than a year earlier. Thereby domestic (+7%) and foreign bookings (7.8%) picked up more or less equally strong. Euro zone and non-euro zone clients raised their new orders by 3.5 and 10.1%, respectively. In the full last year overall incoming orders exceeded their pre-year level by 6.7%. Note that the number of bulk orders was above average. Last year’s impulses were mainly set by foreign bookings which soared by 10.2% (euro area: +9.4%, non-euro area: +10.6%). In contrast, domestic orders grew comparatively moderately in 2015, namely by 2.7%. 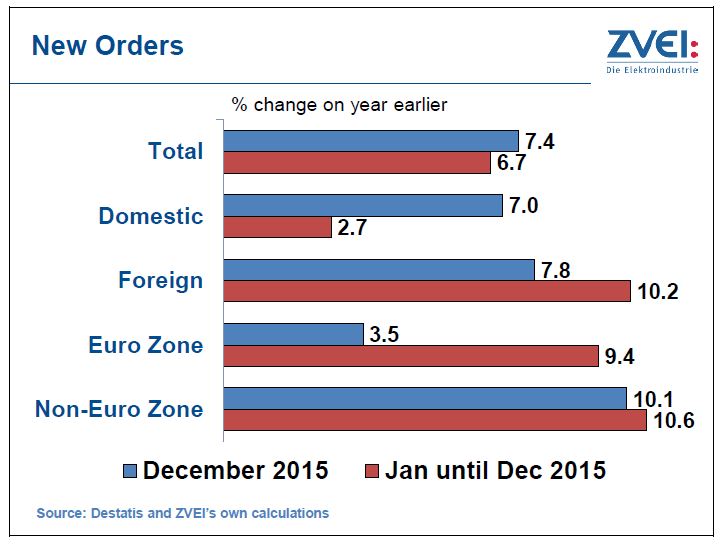 Production
Production – adjusted for price – of the sector’s firms has topped its pre-year level by 2% in December 2015. Thus, over the entire last year real output has grown (provisionally) by 0.9%. Regarding 2016, Zvei expects that the sector’s output will grow by 1%. The capacity utilization within the sector has declined somewhat at the beginning of the first quarter of this year. It fell from 84.4% to 82.6% of the normal full use level. The average reach of unfilled orders decreased slightly, too, from 2.9 to 2.8 months. In contrast, the firms’ production plans have been raised in January. 21% of the companies want to increase their output in the next three months to come, only 3% intend to curb it. The rest is going to maintain production at its current level. 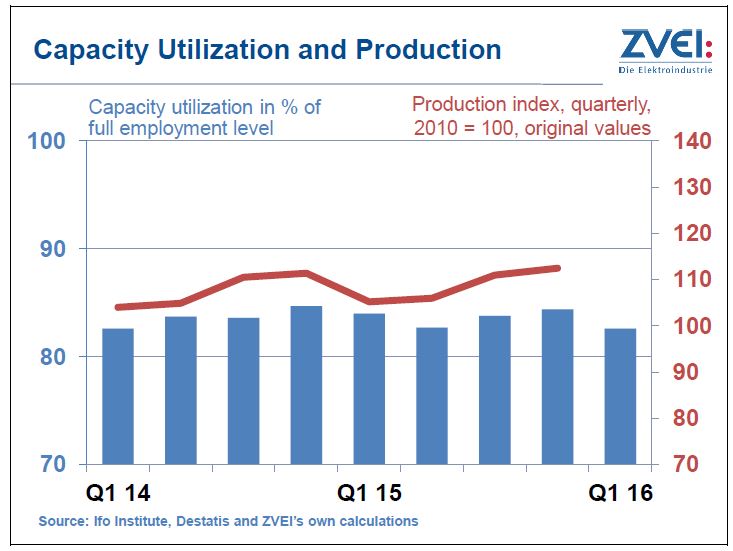 Turnover
The domestic E&E industry’s turnover rose by 3.3% (year over year) to 15.9 billion euro in December 2015. But while domestic sales decreased slightly by 1.1% to 7.8 billion, foreign sales increased by 7.4% to 8.1 billion. Businesses with partners from the euro area really soared by 21.3% to 3 billion euro, whereas those with customers from third countries almost stagnated (+0.6% to 5.1 billion). In the full year 2015 the sector’s turnover (which also includes services) came to 178 billion (preliminary figure) and, therewith, exceeded its pre-year level by 3.7% or rather 6.2 billion. Domestic sales stagnated at 86.5 billion (-0.1%), but foreign sales picked up by 7.4% to 91.5 billion. Here turnover with euro zone and non-euro zone clients rose by 12% to 34.3 billion and 4.9% to 57.2 billion, respectively. 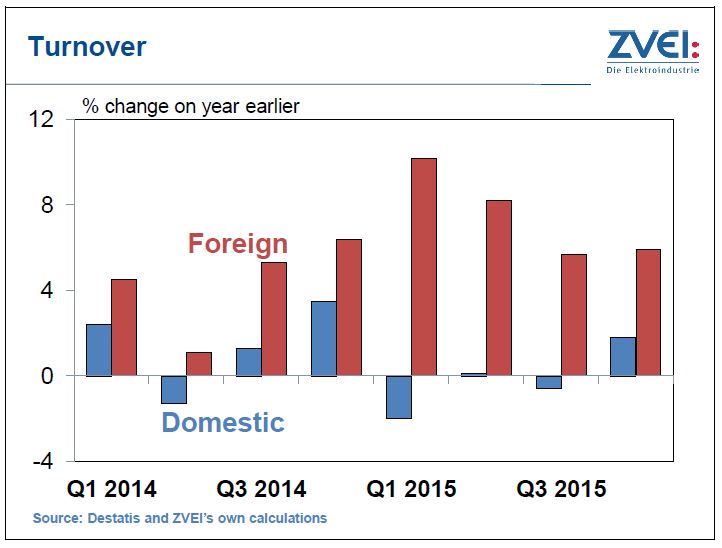 Business climate
After the slight increase in December the business climate in the German E&E industry has weakened somewhat in January 2016. While the assessment of the current economic situation changed for the worse, overall business expectations for the next six months to come changed for the better. 31% of the sector’s companies evaluate their present situation as good, 59% as stable and 10% as bad. At the same time, 25% of the firms reckon that their businesses will go up in the next six months ahead. 67% and 8% are awaiting steady and declining activities, respectively. Export expectations have decreased in January. 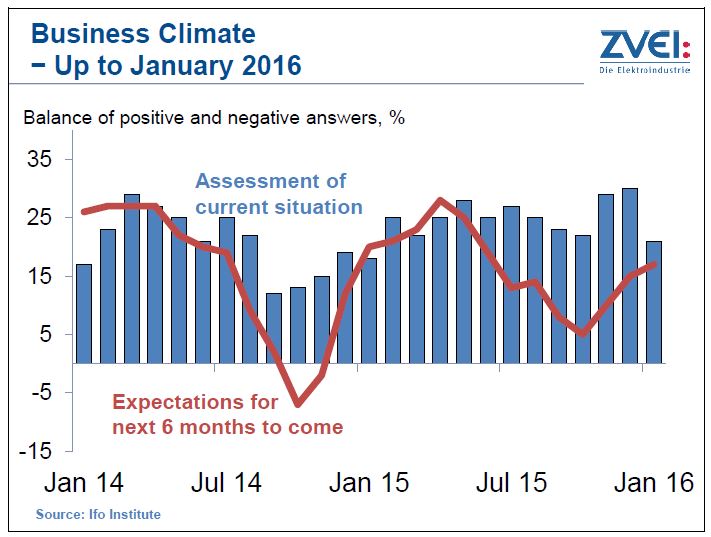