According to GfK Temax, in the fourth quarter 2015 the Western European technical consumer goods market closed with a sales volume of approximately €62.8 billion. This corresponded to an increase of 2.8 percent, compared to Q4 2014. The whole of 2015 was also successful with a growth rate of 2.9 percent, compared to 2014. The total sales volume in 2015 amounted to about €208.9 billion. The best sectors in terms of growth were telecommunications and household domestic appliances.

Major domestic appliances
In Q4 2015, the Western European MDA sector grew by 4.9 percent, compared to the same period in 2014, and rose to around €8.9 billion. As a result, the sector ended a successful 2015 with a total sales volume of almost €33 billion. This corresponded to an increase of 5.3 percent, compared to the whole of 2014. All product groups contributed to the positive growth and prices remained very stable throughout the year. The main growth drivers were energy saving appliances with A++ and A+++ labels. Washing machines, cookers and microwave ovens achieved above average growth in the final quarter. 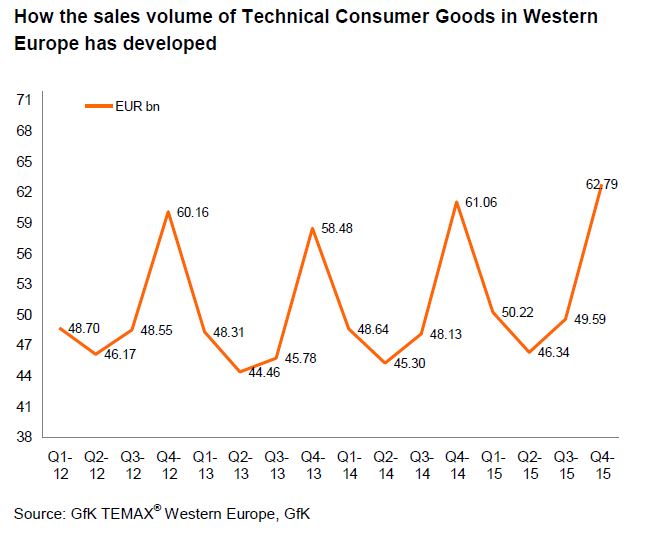 Small domestic appliances
In Q4 2015, the SDA sector in Western European grew again – this time by 9 percent, compared to Q4 2014, with revenue of around €5.1 billion. Total sales volume in 2015 amounted to €15.9 billion: an increase of 8.8 percent, compared to 2014. As a result, 2015 was a very successful year. The principal sales drivers during the Christmas period were fully automatic espresso machines, handstick and robotic vacuum cleaners. Personal care products were also in demand.

Telecommunications
In the final quarter of 2015, the Western Europe Tlc market increased sales by 8.5 percent, compared to Q4 2014 – up to €16.1 billion. Throughout the whole year, the sector even grew 11.7 percent, compared to 2014, and generated a total sales volume of €51.1 billion. Although there were signs that the smartphones market was saturated in most of the Western European territories, replacement purchases in this segment provided a strong, ongoing stimulus. 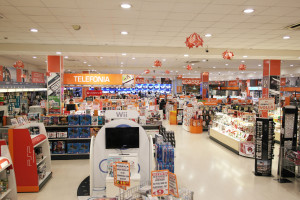 Information Technology
In Q4 2015, the Information Technology market in Western Europe decline slightly – down by 0.3 percent, compared to Q4 2014, to €16.8 billion. The total sales volume in 2015 amounted to €55.9 billion. This also represented a slight fall of 0.9 percent. 2015 was a year of re-adjustment, change and restructuring in the IT sector, especially in the computing products segment. New models, operating systems and cloud products started to provide a new value proposition. This will be the basis for growth in 2016 and beyond. It is anticipated that mobility, connectivity, and multi-device usage will be the key trends in 2016.

Consumer electronics
Once again, in the fourth quarter of 2015, the Western European consumer electronics market failed to achieve a turnaround. On a year-on-year basis, the market closed with a sales volume of €9.5 billion, which corresponded to a decrease of 2.1 percent compared to Q4 2014. However, when 2014 in total is compared to 2015, the sales volume of around €29 billion represented a decrease of 5.2 percent. As the market for CE products is strongly linked to the market for TVs, the negative tendency registered in 2015 was very much in line with a fall in sales of TVs. The audio products segment continued its positive development as innovative products and solutions accelerated.

Photography
The Photography sector generated a sales volume of €1.5 billion in Q4 2015. This corresponded to a 5.7 percent decrease compared to Q4 2014. However, on a country level, Denmark, Italy, Spain and Greece achieved a positive growth rate. The total sales volume in 2015 amounted to roughly €5.6 billion, a fall of 6.9 percent compared to 2014. Nevertheless, demand for high-quality cameras over €1,000 grew. In addition, changeable lenses contributed to the stable sales trend. * Photography includes digital cameras and photography accessories. Due to a change in digital camera reporting (camera kits are no longer split into separate cameras and lenses products, but are reported together), data has been reworked for the Photography sector.