The technical consumer goods market in China registered an increase of 8.3% in the first quarter of 2016, when compared to the same quarter in 2015. The telecommunications sector performed best, with an increase of 22.8 percent. The office equipment and consumables, and small domestic appliances sectors followed, with increases of 19.9 percent and 15.8 percent, respectively. The information technology, photography, consumer electronics, and major domestic appliances sectors all declined in Q1 2016, compared to the same period of 2015. Here are the data published by GfK Temax. 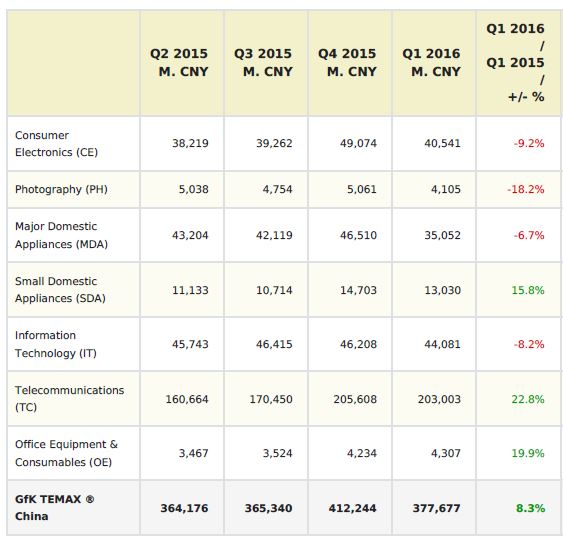 Major domestic appliances
The size of the Chinese MDA market was CNY35.05 billion in Q1 2016. There was a decline of 6.7 percent, compared to the same period in 2015. The decline in the real estate market growth last year affected sales in China’s MDA sector as fewer appliances were needed. Rapid growth in the online channel (especially among entry-level products) drove average prices down.

Small domestic appliances
In Q1 2016, the SDA market recorded a sales value of CNY13.03 billion, an increase of 15.8 percent, compared to Q1 2015. A new national standard (published on March 1st, 2016) promoted sales of air treatment equipment which increased by 30.9 percent, compared to the same quarter in 2015. In the shavers segment, the market share of middle and high-end products continued to grow.

Consumer electronics
In Q1 2016, the size of the CE market fell by 9.2 percent, compared to the same period last year, and recorded revenue of CNY40.54 billion. The market for Panel TVs expanded through online sales. However, in the offline market, there was a large fall, compared to the same period in 2015. Sales of LCD TVs grew as costs of production fell. This led to a drop in prices for Panel Tvs.

Photography
The photography market recorded revenue of CNY4.11 billion in Q1 2016. The overall market declined by 18.2 percent, compared to Q1 2015. Sales in offline channels fell while, in contrast, online channels maintained a positive growth rate. It is increasingly apparent that consumers are using mobile and smartphones, for photographic purposes, instead of cameras – especially in the middle and high-end market.

Information technology
Revenue of just over CNY44 billion was achieved in the IT sector in Q1 2016, a fall of 8.2 percent, compared to the same period in 2015. Laptops and PCs for gaming gained in popularity and the market share of these products increased in Q1 2016. The performance of larger tablet devices was lower than expected. Mediatablets declined by 17.8 percent, compared to Q1 2015.

Telecommunications
In Q1 2016, the sales value of the sector reached CNY203 billion, up by 22.8 percent, compared to Q1 2015. Unit sales of mobile phones reached 0.4 billion in 2015, the equivalent of around 30 percent of China’s population. It is anticipated that the market will now enter a stable phase. Several new models were launched by domestic manufacturers and achieved good sales. 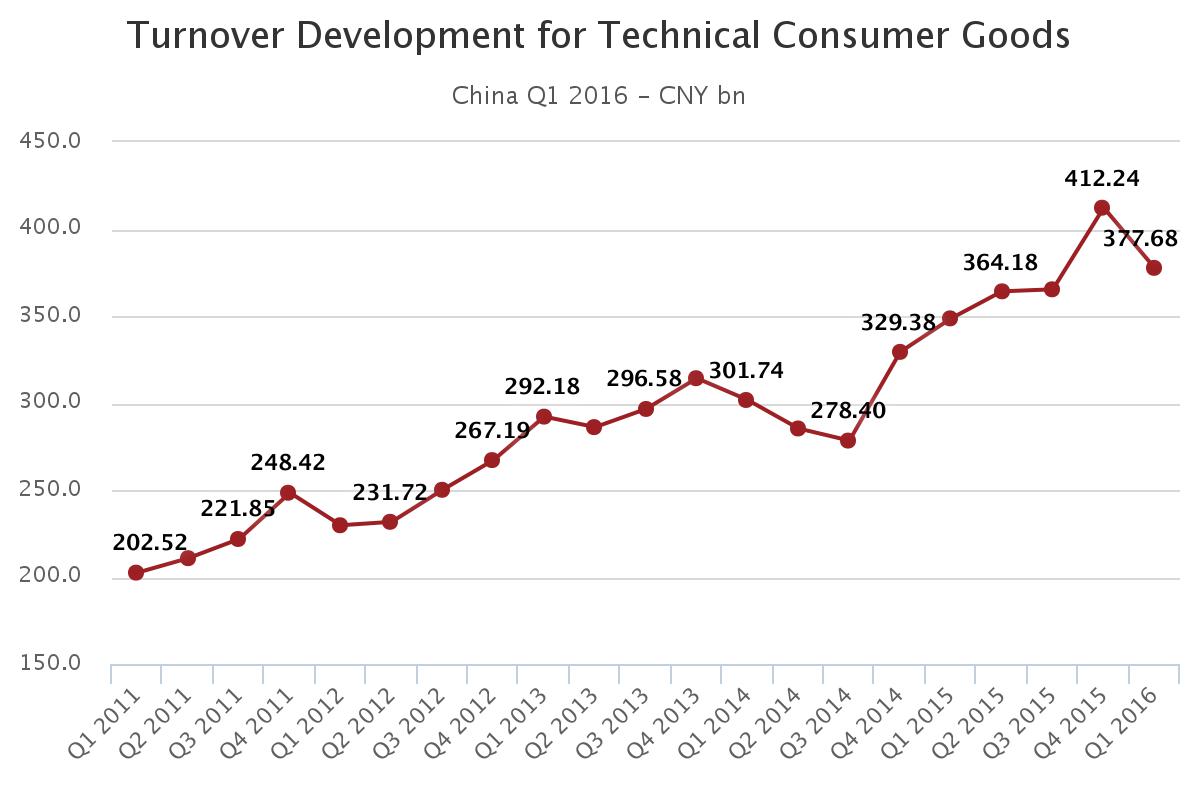