Zvei has published its Business Cycle Report (edition December 2016). For the German electrical and electronic industry the trend is negative in the considered period. Here are the data about new orders, production, turnover and business climate.

New orders
New orders for the German electrical & electronic industry failed their pre-year level by 4.2% in October 2016. Domestic and foreign bookings declined by 2.1% and 6%, respectively. Especially new orders from the euro zone were starkly on the decline. They sagged by 17.1%. In contrast, bookings from third countries were 1.6% up compared with a year earlier. In the full period from January through October of 2016 new orders altogether decreased by 1.3% (again year-on-year rate). Here domestic and foreign clients booked 0.4% and 2.0% less than in the same period last year, respectively. New orders from euro area countries fell by 0.8%, and bookings from third countries were 2.7% lower than one year ago. 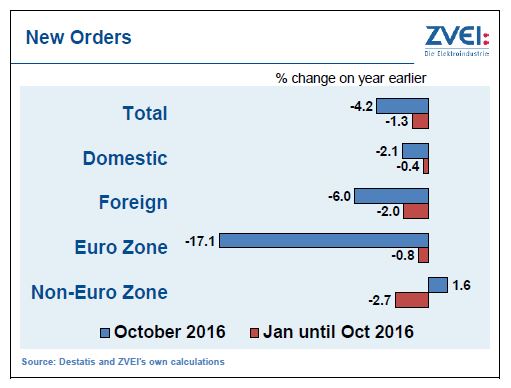 Production
Production – adjusted for price – of the sector’s companies was 5.3% down on its previous year’s level in October 2016. Thus, the iterated change of positive and negative individual monthly results, which has been so typical for the course of the running year, continued. Up to and including October there have been six months with positive and four months with negative rates of change so far. However, on the bottom line – i.e. accumulated from January through October – the German E&E industry’s output increased by 1% (year-on-year). The firms’ production plans have – on balance – been lowered somewhat in November of 2016. 19% and 6% of the companies plan to increase or rather decrease their output in the next three months to come, respectively. The remaining firms intend to maintain their current production level. 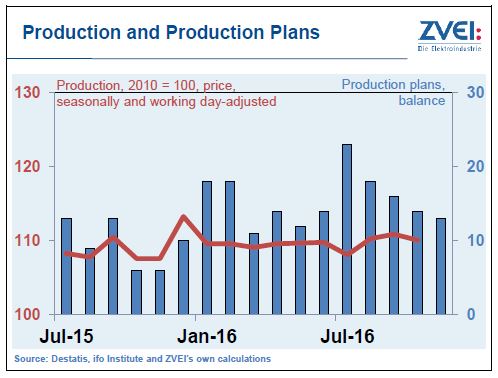 Turnover
Sales of the domestic E&E industry’s companies decreased by 6% (year over year) to 14.5 billion euro in October. With it, domestic turnover (-9.5% to 7.1 billion) sagged remarkably more strongly than foreign turnover (-2.6% to 7.4 billion). Regarding businesses with foreigners, the decline in sales to euro zone customers (-5.9% to 2.7 billion) was more pronounced than to clients from third countries (-0.7% to 4.7 billion). In the first ten months of the 2016 the sector’s overall turnover came to 146.2 billion euro, leaving it slight 0.4% higher than a year earlier. Here domestic sales (+0.5% to 71.1 billion) and foreign sales (+0.3% to 75.1 billion) developed quite similarly. While turnover with euro area countries of 27.5 billion was on the decline by 1%, sales to third countries rose by 1.1% to 47.6 billion. 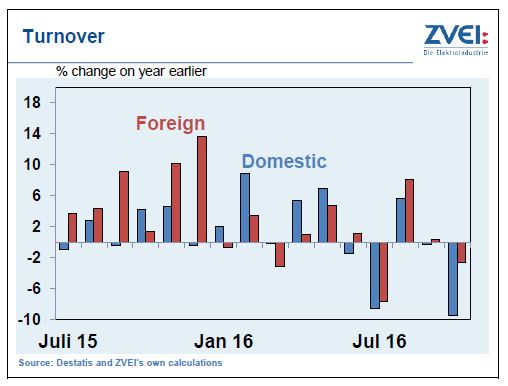 Business climate
On balance the business climate within the German E&E industry hasn’t changed at all in November 2016. Note that the result of the US presidential election was already partly included in the survey’s response. While the companies’ assessment of their current economic situation was slightly worse than back in October, their overall business expectations changed for the better somewhat. 37% of the sector’s firms now evaluate their present situation as good, 55% as stable and 8% as bad. At the same time, 22% of the companies reckon with rising, 66% with steady and 12% with decreasing affairs in the next six months to come. However, back in June the balance out of positive and negative expectations had been higher by 10%-age points still. The companies’ export expectations fell for the second consecutive month in November. 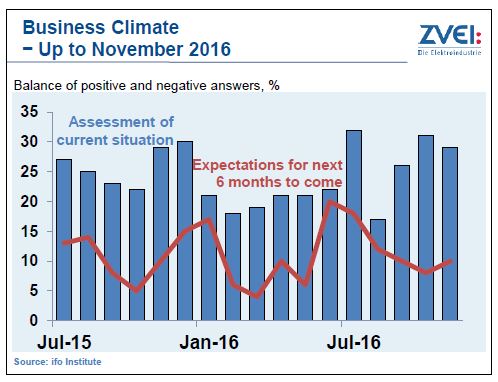