According to GfK Temax, in the first quarter of 2018 the Western European technical consumer goods market grew by 2.4%. Telecommunications, Information Technology and the Home Appliances markets increased, while Consumer Electronics, Photography and Office Equipment witnessed a single-digit drop in sales. The TCG market in Western Europe amounted to 51.9 billion euro. 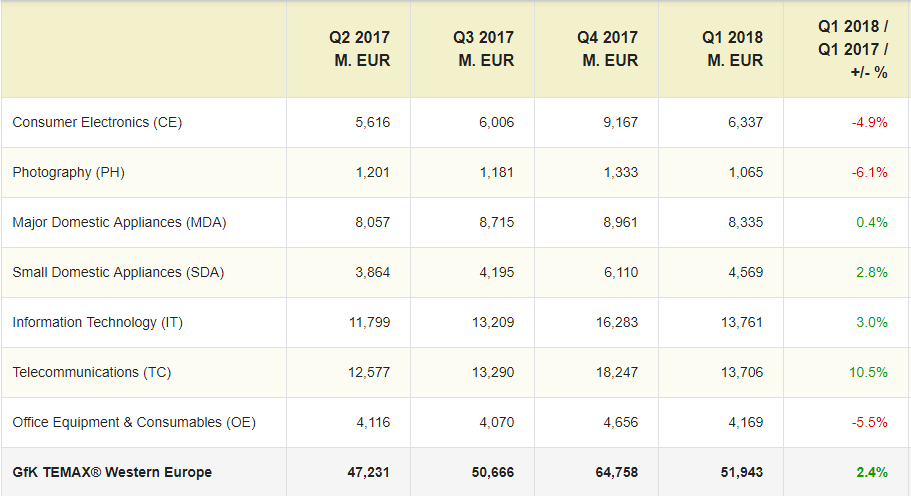 Major Domestic Appliances
Overall the sector was flat year-on-year despite the continued double-digit growth in Portugal primarily due to the cooling segment as well as in the tumble dryers and dishwashers. Single digit growth has been registered in Netherlands, Denmark, France and in some other markets. On the other hand, UK and Sweden declined, driven primarily by the softness in the cooking and cooling categories. Declines have been recorded also in Italy and Germany and they have been associated with weaker year-on-year sales in the washing machine category.

Small Domestic Appliances
Most of European Countries showed ongoing growth with Finland on top with a double-digit growth. Vacuum cleaners and hot beverage makers were the growth drivers across all countries, also in the countries with overall negative growth. However, Swedish market shrank by high single-digit decline rate. Belgium, Italy, Greece and Denmark declined by around 1%. Food preparation in almost all countries and increasingly shavers (France, Spain, Netherlands, Portugal) were under pressure.

Consumer Electronics
Denmark witnessed a double-digit growth. Finland, France and Greece presented the highest single-digit sales increase. UK, Belgium and Portugal showed a stable market performance. Besides, the increase on the Danish market was due to a double-digit growth for loudspeakers and a stable increase for audio home systems and TVs. On the other side, Germany faced the largest sales drop with double-digit decline; and markets in Austria, Sweden, Netherlands, and Italy also shrank. Spain reached the lowest negative growth. The decline in Germany was mainly due to highly decreasing audio home systems, docking/mini speakers, PTV/Flat and set-top-boxes. The decline in set-top-boxes stemmed from last year’s DVB-T switch-off, which dragged the market in Q1 2017. 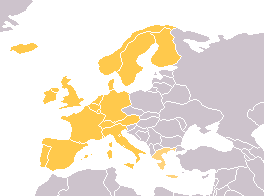 Photography
The double-digit market increase in Italy was mainly due to the compact system cameras and the fitting lenses. Other countries registered negative performances: Belgian, Finnish, French, Greece, UK, Swedish and Danish market dropped with double-digit decline rates, and Spain, Netherlands, Germany and Portugal went down with mid-size single-digit rates. High decline has been recorded in UK mainly due to decreasing lens sales.

Information Technology
Strong growth has been registered in Austria, Belgium, Netherlands and UK. In this last country, the majority of the categories (especially desk & mobile computing and communication devices), drove the growth. Mobile and desk computing as well as monitors and keying devices were among the main growth drivers in the Netherlands. On the other hand, there were declining IT markets in Denmark and Sweden. Mobile computing was the main reason for the fall in Denmark and in Sweden mobile computing, desk computing and communication devices decreased as well.

Telecommunications
There was a double-digit sales increase in most markets, leading to an overall +10% year-on-year growth in the Europe 15 countries total. Single digit growth has been recorded in the UK and Finland. Only the Danish market declined during the first quarter of 2018.

Office Equipment and Consumables
Only Austria and Portugal grew in Q1 2018. In Austria, cartridges and multi-functional devices accounted for the growth, and inkjet cartridges and printing devices were the main growth drivers in Portugal. Besides, printers grew in the Netherlands, Spain, Italy and Greece. On the opposite side, there was a significant decline in Denmark throughout all categories and a double-digit fall in Sweden, UK, the Netherlands and Greece.