According to the “ZVEI Business Cycle Report” (September edition), in July 2018 the German electrical and electronic industry received 3.5% more new orders than a year earlier. The growth rate was the highest reached within the last six months. Domestic and foreign bookings increased by 1.7% and 4.9%, respectively. Customers from the euro area raised their orders by 5.6% in July. Bookings of clients from third countries rose by 4.5%. Thus, for the full period from January through July of this year a rise in new orders of 1.5% (again year over year) is recorded. Here domestic bookings fell by 3%, whereas foreign bookings rose by 5.2%. Euro zone customers ordered 2.5% more than in the year before, and new orders from third countries picked up by 6.9%. 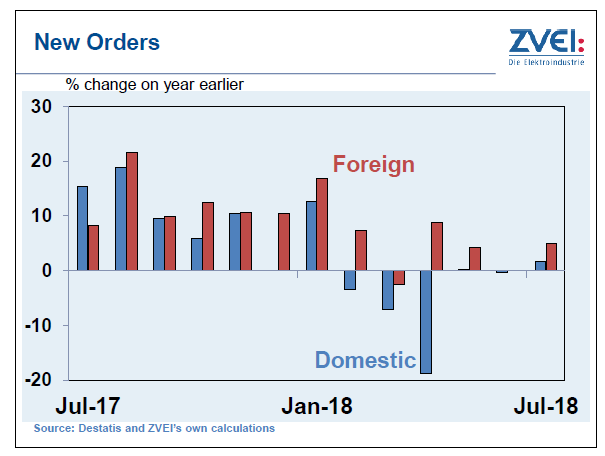 Production picks up at the beginning of the second half of this year
Real production – i.e., output adjusted for price – of the domestic E&E industry rose by 4.7% (year-on-year rate) in July 2018. In the total first seven months of this year the sector’s aggregate production surpassed its corresponding pre-year level by 3.6%. Here the industrial goods sub-sectors were up by 3.9% from a year ago. At the same time, the output of intermediate goods (or rather electronic components and systems) increased by 6.4%. The manufacturers of consumer goods, however, produced 3.9% less than a year earlier. On balance, the sector’s companies once again lifted their production plans in August. 28% of the firms intend to raise their output in the next three months to come, whereas only 6% want to curtail it. Thus, two-thirds are planning with a rather steady output level. 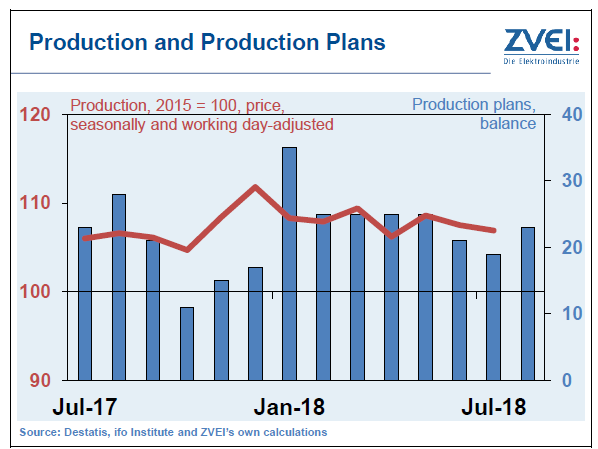 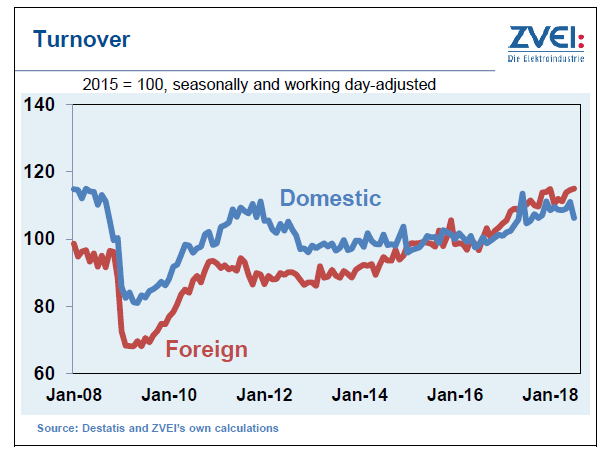 Business climate back on the rise in August
After its decrease in the preceding month the business climate within the German E&E industry was back on the rise in August. Thereby, the increase was more or less solely traceable to higher expectations. The companies’ assessment of their current economic situation (which is on an elevated level) hardly changed at all. 58% of the sector’s firms evaluate their present situation as good, 34% as stable and only 8% as bad. Concerning the overall business expectations for the next six months to come, 24% of the companies are awaiting rising businesses. 61% and 15% reckon with steady or rather declining affairs, respectively. Following a decline in July export expectations rebounded in August, too. Here the balance of positive and negative answers increased by three to 17%-age points now. 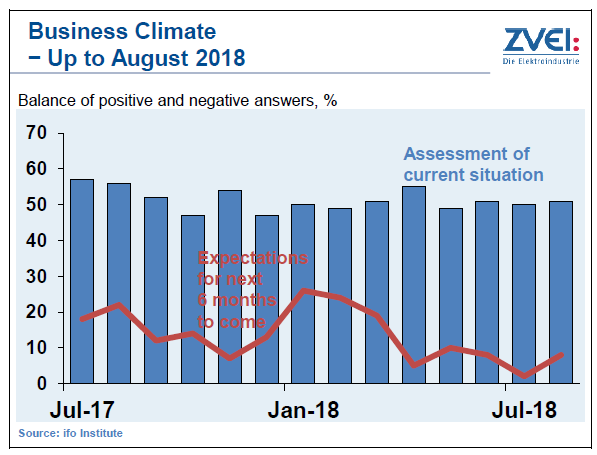