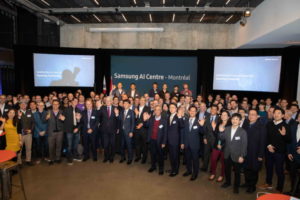 Samsung Electronics announced that it is establishing another artificial intelligence center in Montreal. This announcement complements earlier news of multiple AI centers launched in North America and continues Samsung’s efforts in AI that include the development of Samsung’s virtual assistant Bixby. The center is the fourth Samsung AI Center to be established in North America following the centers launched in Silicon Valley, New York and Toronto. The opening of the AI center in Montreal will allow Samsung to expand its outpost for industry collaboration and talent recruitment in a major AI hub in Canada, dedicated to research and development of core AI technologies that entail machine learning, language, vision and other multi-modal interactions. “By leveraging the power of AI in Samsung’s products and services, we must focus on creating new values, never seen nor experienced before – said Seunghwan Cho, Executive Vice President of Samsung Research -. To do this, seven Global AI Centers, including the Montreal AI Center, will play a pivotal role.”