Last year Italy confirmed its role as important nation in the export of white goods; however, the general trend is decreasing.

Like every year, ha factory presents the trend of the Italian export and import of white goods and consumer electronics, according to the data released by Istat. The first do not include non-electric domestic appliances, operated by different energy sources (gas, liquid or solid fuels); mixed ones, partially electric, are instead included.

Export
Italy goes on being an important exporter of white goods; at the beginning of the XXI century it ranked first in Europe and second in the world, but then things changed. Surpassed by Germany first, perhaps by Poland recently (the data on the matter are controversial), Italy currently holds the sixth place in the world: a change caused by the delocalization of big multinational Groups’ productions towards low labour cost Countries.
In 2019, the negative global trend, started in 2018, worsened for white goods. After years of growth, the Italian export lives now a downturn phase and this is likely to grow wider in the next future.
The two main destinations have always been Germany and France. Despite a slight decrease of the first, they together represent 23.8% of the total, an incidence resembling the global Italian export in 2019.
Great Britain recovered the third place; 2019 was however the last year before Brexit. A sudden fall, as destinations, affected instead The Netherlands and Poland, maybe owing to new productions in the second. Spain, USA and Sweden maintain their positions in the successive places in the ranking.
Even if less relevant, the export of brown goods scored the 7.1% growth in 2018. Germany remains the primary destination and USA rank second, while France remains third, confirming the 2018-situation. Surprising is the growth of export to the Czech Republic. 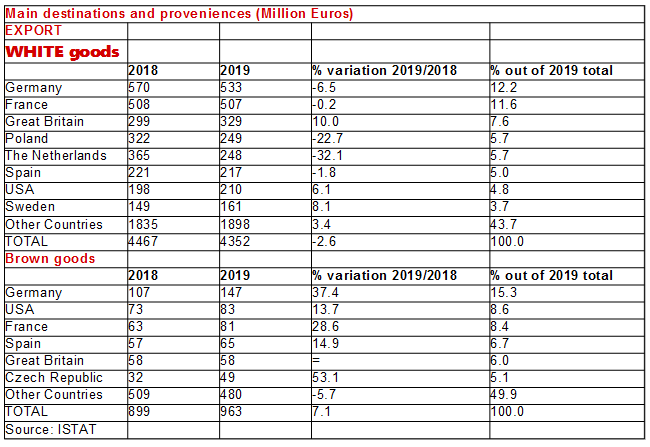 Import
Import, relevant for Italy, increases its growth in white goods with +6.1%. This corresponds to consumptions’ trend. China still ranks first, followed by Germany, Poland and Turkey, which surpassed Romania. These 5 Countries represent together almost three quarters of the total.
Total import was affected by a slight –1.6% drop in brown goods.
China remains the main provenience, followed by The Netherlands, Slovakia and Czech Republic in downturn phase. Hungary achieved a notable growth. 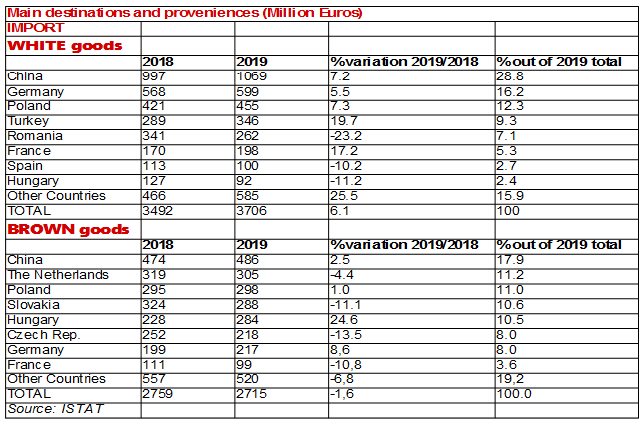 Prospects
Coronavirus pandemic will exert negative consequences on markets but their entity cannot be evaluated a priori. Anyway, the repartition of destinations and proveniences of the Italian foreign trade is not expected to undergo relevant changes.

The expectations for IC products in 2020

TCG market proves its resilience to the pandemic