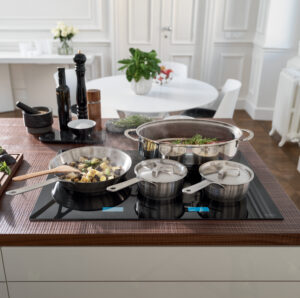 Thanks to the Cookassist function, Franke‘s new Mythos induction hob assists the user in creating 63 automatic recipes. After selecting the dish that the user intends to cook, the consumer simply has to enter the information relating to the thickness, select the cooking zone and place the pan: the hob will do the rest. In addition, it is possible to start up to 4 Cookassist cookings at the same time or to combine its use with traditional cookings. The hob is available in two models that have 8 cooking zones and double LCD touch control display with central slider. Thanks to the possibility of programming the cooking time, the hob switches off automatically when the cooking is finished, warning with an acoustic signal. Mythos also has the innovative Flex Pro area that allows to use the hob as a single large cooking area on which to place pans of different shapes and sizes. To this option is added the French Plaque function, thanks to which the hob is divided into four differentiated zones, activated together with a set power. Based on the dishes that the user wishes to prepare, the pans can be moved from one area to another, continuing the preparation at the same time but adapting the temperature in each individual area.