Pandemic has triggered a positive trend in Germany for both white and brown goods, which grow in value.

With 83.2 million inhabitants (of which 13.7 % foreign), according to Destatis statistics governmental Body, Germany is the most populous nation in West Europe. In 2020, its per head income amounted to 57,000 dollars, almost one and a half times the Italian one.

White goods
In 2020 in Germany – according to the surveys by GfU research agency – the sales of white goods reached 17.1 billion Euros, with the 14.8% rise versus 2019. Concerning big appliances, 10 billions were at stake, 7.1 for small ones, with respective growths by 11.1%, and by 20.3%.
Freezers were the record-product, followed by both standard and built-in ovens.
According to ZVEI, pandemic is the cause of this boom, as it has deprived consumers of the expenses for holidays and entertainment, making available more money, then invested in the house improvement. As confirmation: the German building market is living a neatly positive phase.
The change in consumers’ habits influenced also food purchases, more concentrated and then with higher unitary volumes. Freezing compartments of standard refrigerators are no longer sufficient and this results in the exceptional boom of freezers.

Brown goods
The crisis of brown goods, in course for years, has been attenuated by many consumers’ staying at home. Sales are rising for TV sets and videogames, concerning other products consumers are oriented towards more comfortable, and then more expensive, appliances. Overall, the sales of brown goods decreased by – 2.5% only in quantity, however increasing by 4.5% in value, up to a total of 9.4 billion Euros.

Prospects
Pandemic triggered a positive trend, which is going on in 2021. It is hard to say if and when it will end. In any case, the year in course should bring further growths for both white and brown goods. The basic trend towards more performing, and then more expensive, appliances will be confirmed. 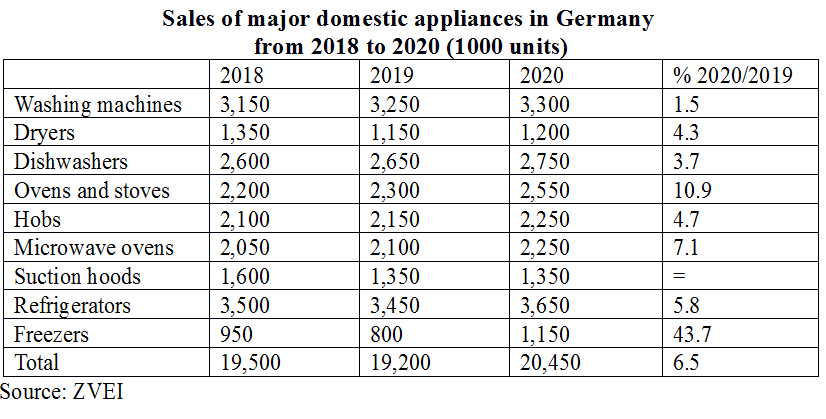