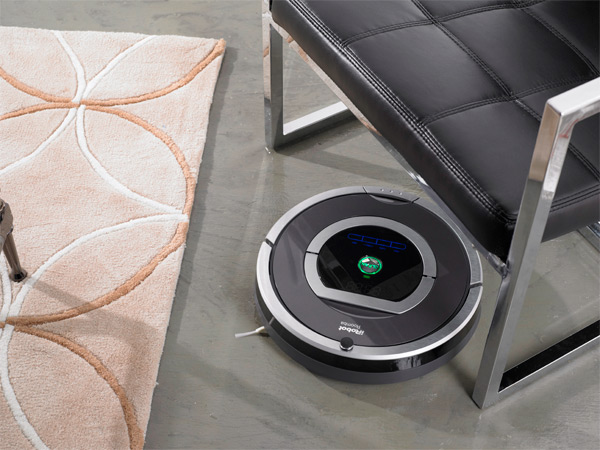 New frontiers in the world of vacuum cleaners: Roomba 700 series is a robot for room cleaning which, thanks to an advanced software system and sensors, is able to “read” the rooms and perform accurate cleaning.

1 The idea
Creating a robotized cleaning system capable of autonomously handling and managing the dirt and dust on floors.

2 The concept design
Applying robotic technology to home needs, being inspired by the world of vacuum cleaners. Roomba 700 series is the last-generation robot designed for floor cleaning.

3 The engineering
The device is equipped with an advanced software system and sensor which allow to recognize the quantity and dirt concentration on floors and to identify and avoid the most different type of obstacles met on its way. 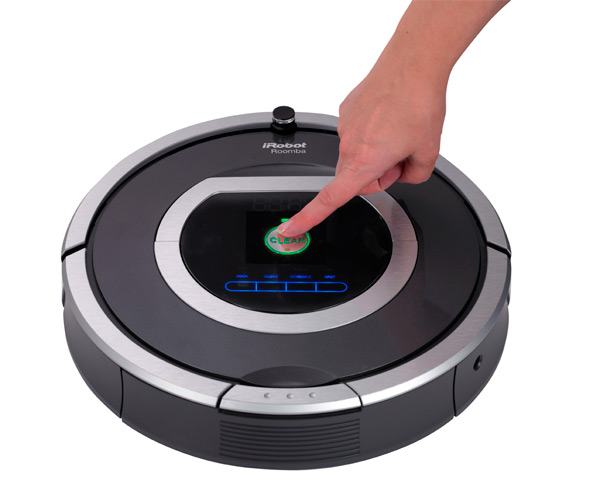 4 Functionning and final result
Roomba 700 series encloses in one singly program different functionalities which result in an effective and thorough cleaning of the rooms. Users only have to start the robot which works autonomously. It is only needed to push a button to start the cleaning cycle: Roomba will start moving on the floors and remove the solid particles it will meet. It moves under and besides the furniture, along the walls, avoiding obstacles and steps in order not to fall.

5 Production
Roomba 700 series is available in two models which represent the latest generation of home robots. The first vacuum cleaner robot has been marketed in Italy by Nital 9 years ago. Nowadays it is estimated that the market has about 200,000 items (Gfk). 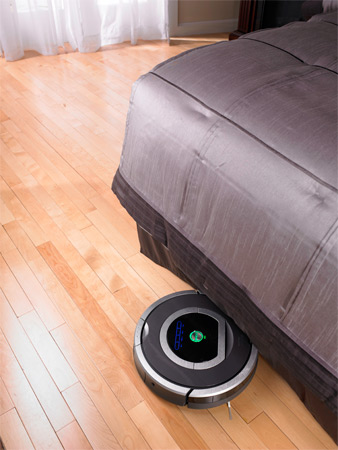 1 The idea
Roomba 700 series, the robot for floor clearing distributed in Italy by Nital, has been developed by the American company, iRobot, which for more than twenty years has been working in the robotics industry and during the last years – besides military production – it has opened to a series of consumer devices.
“Starting from the know-how developed in the military and aerospace industry – says Piermauro Modugno, Product Manager iRobot – we decided to put our expertise at the service of the home environment”. And the AI gets closer to our daily life thanks to a product purposely conceived to simplify home and floor cleaning in particular. Roomba is not a vacuum cleaner, but a true robot capable of autonomously managing any dirt or dust accumulation. “Its mission is to clean the floor and, in order to do it at its best, it has been equipped with a technology allowing it to recognize obstacles, to adapt and manage abnormal situations”.

2 Concept design
“Roomba has been designed for practical use – says the manager – for being suitable to clean under beds, tables, sofas with no need to move them”. This is the reason why Roomba is not much higher than 9 cm and can slip under many pieces of furniture. “Unlike other robots which may be tricked by bedcovers and sofa covers, believing they are impenetrable, Roomba moves them softly and cleans thoroughly even in the most hidden areas” says the manager.
Roomba has been designed with simple and essential lines, a 35 cm diameter disk, and is equipped with a practical handle for easy lifting and moving from a room to another. “The device is the result of five year investments which allowed bringing the Italian home robotics market in the forefront worldwide, only after the U.S.A. and Japan”.

3 Engineering
“The main difficulties to overcome when designing and developing a robotic unit – says the manager – are those related to the aim of creating a product that ensures high reliability on the long term”. In the case of a robot devoted to floor cleaning, it was fundamental to work on the brushes system and on its ability of moving avoiding obstacles, such as furniture, carpets and walls. Roomba core is made up of its sensors which make the device move autonomously: they make it slow when it gets close to an object and “order” it to come back and resume aspiration. The integrated soft-touch shock-absorbing buffer ensures a further protection guarantee for the objects that Roomba lightly touches. In order to improve safety, the robot is moreover equipped with six Sensori Vuoto which detect the presence of steps and stop the device.
Another important aspect on which the designing team has focused on is the brush systems: “Since they are battery operated, robots cannot clean only through their aspiring power – says Piermauro Modugno, Product Manager iRobot -, as it happens with usual vacuum cleaner (1,5000 or more Watt). Consequently, as far as robots for floor cleaning are concerned, their aspiring efficiency mostly depends on their capacity of mechanic aspiring of dirt. This is the reason why it was necessary to patent a system with double brushes (centralized and counter-rotating), one made of bristle and the other made of rubber, which simulate the broom-and-dustpan effect. This system proves to be significantly more effective than single-brush systems”.
Furthermore, in order to avoid that Roomba gets caught on cables, fringes, threads or long pile carpets during moving, its brushes are conceived to automatically invert the sense of rotation: by rotating in the reverse sense, they can free themselves from tangling objects. 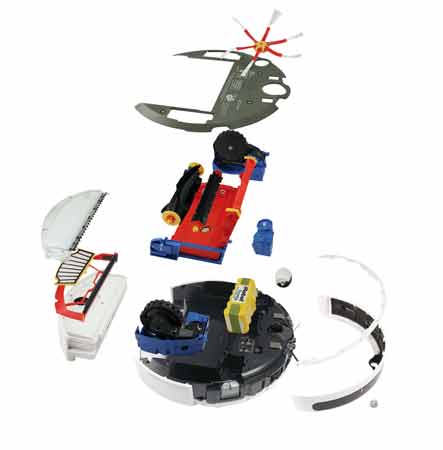 4 Functionning and final result
The new Roomba 700 Series features the latest-generation iAdapt navigation system, which allows dealing with the specific conditions of every home room. This happens without selecting complicated programs: it is only needed to activate the “Clean” mode. The sensors managed by the iAdapt system detect the environment surrounding Roomba 67 times per second, mapping the room; the robot works in three main movement modes (Wall Follow, Criss Cross, Back and Forth), reaching even the areas behind the curtains, bedcovers and tablecloths, without setting any relevant function. “As a matter of fact, Roomba autonomously selects 40 different activity types through which it suits its functions to the specific conditions of the room that must be cleaned”. For instance, Roomba 700 Series is capable of recognizing walls; it gets closer to them and cleans them perfectly along their whole length through a lateral brush that cleans the points where the dirt mainly amasses.
The iRobot company has also patented the AeroVac2 aspiration system through which the device can aspirate even the finest dust as well as heavier particles (crumbs, animal hair, pop corns) in a more efficient way. This is due to a purposely designed container and an improved motor. Since the dirt on floors is not always uniform, Roomba 700 is equipped with a further important added value: the second generation Dirt Detect, a multi-sensor system, both piezoelectric and optical, which detects the quantity and dirt concentration and adapts the cleaning mode of the robot. In this way, when Roomba 700 Series detects a dirtier area, it automatically focuses on that point and simulates the movements that users would do with a traditional vacuum cleaner: it starts going back and forth on that area until its sensors detect that such area is clean. 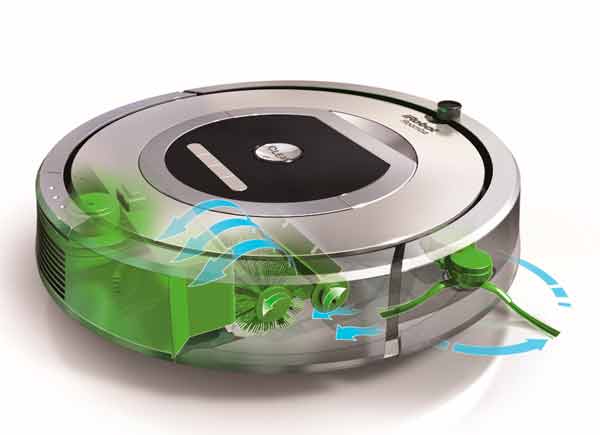 5 Production
Officially presented in Italy at the end of 2011, Roomba 700 Series is available in two models: Roomba 770 and Roomba 780. If compared to the last series, the device is characterized by improved sensor system and by a more modern and functional design.
“For the assembling phase, we chose high-level plants having extremely high production standards; this gives our robot a quality and reliability which can be rarely found in devices which have to perform such a demanding task”.
Over 200,000 iRobot Roomba sold in Italy allowed lying strong basis for the development of home robotics. According to GFK, the market exceeds 100,000 sold items in 12 months (101,722 items sold in 2011) and, according to forecast, it will exceed new heights. 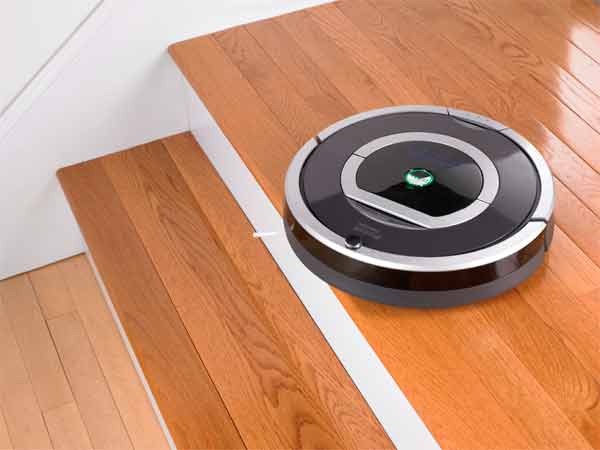 TECHNICAL CHARACTERISTICS
Double Hepa Filter: it captures dust up to 0.3 micron, limiting the recirculation of fine dust and making fresher and healthier air

Light indicator for full container: it signals when the dirt container is full and must be emptied. It improves cleaning efficiency and maintenance.

Lighthouse system: the models equipped with such system are “led” from a room into another (max 4 rooms) and are called back to their starting point.

Persistent Pass Cleaning: such function allows the device to insist on dirtier areas with back and forth movement. 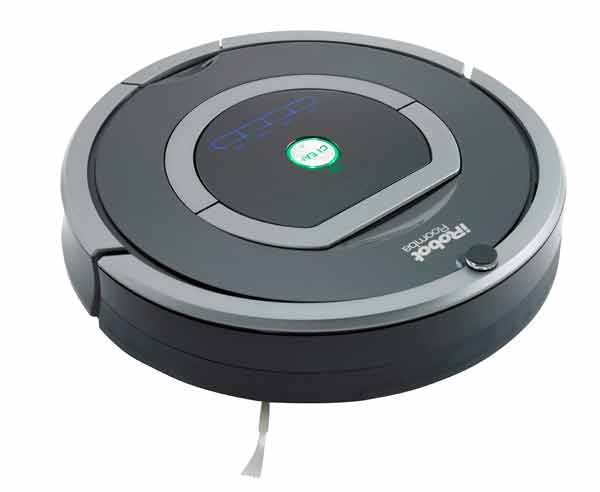