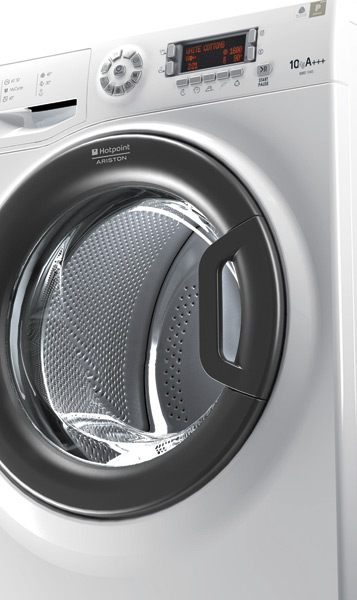 Household appliances are undergoing the same transformation of our home life style. We change, and they have to adapt. On the one side, consumers of household appliances are more aware and demanding when they purchase their washing machine: they take into account not only the prices but also environmental issues and more efficient performances. As for design, above all, as far as washing machines are concerned, consumers are still used to see and use white household appliances.
This is the reason why the “white” industry is making more and more efforts in order to innovate for “development” solutions both on a technological and an aesthetic level, by designing products which can be appreciated by both conservative consumers and innovation fans. In this article we will deal with the WMD 1044 BX washing machine by Hotpoint with standard design and 10 kg loading capacity, spinning up to 1400 RPM and A+++-10% Energy Class. With the same design also a slim washing machine, a washer-drier and a drying machine are available. It is a product for consumers who appreciate design innovation and details, such as the new door handle. At an even higher level, we find the well-known Aqualtis, a success of the Hotpoint brand as for sales and communication. It is now renewed both in design and performance, particularly recognizable by its typical front panel that includes a rectangular door (rounded in its lower part) which allowed the brand to include two hinges on the door in order to make the product even more robust and elegant at the same time. 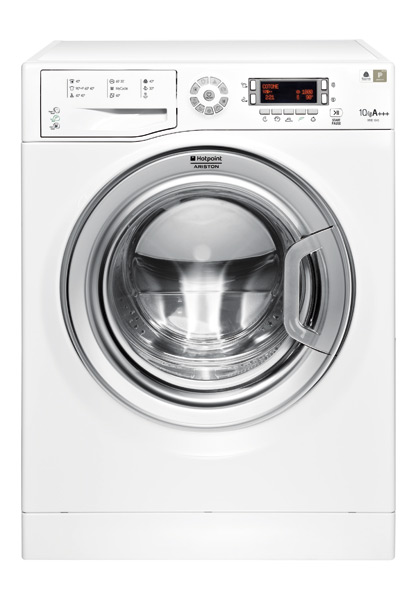 Ergonomics
The upper part of WMD 1044 BX washing machines containing the interface, i.e. display and control buttons, is as the one in the drying machine and the dryer-washer, and allows the brand to create a unique and recognizable family feeling. Of course, the icons for function selection change.
Mass- series devices’ customization is based on the most suitable colors and finishing of the product segment without varying the components’ geometry which may not be liked and not attract customers. In this regard, Hotpoint proposes three different finishing for the door framework that integrates the opening handle.
The access to the drum has a diameter of 340 mm and is considered the widest in its category. The first novelty is the detergent dispenser. Rather than using the traditional pull-out drawer, the company chose a quadrant that opens by rotating around a pivot. Such rotating opening contains a device which helps dosing the detergent correctly, enhancing dosage familiarity for the consumers. The instructions related to the washing cycles are printed externally on the drawer: they can be read more easily than on other machines, since the frontal panel is particularly wide. On the right of the drawer – looking the machine frontally – there are eight buttons for the selection of the washing cycles, located on a ring, and the on / off button at the center. It is a layout which characterizes the whole product range, and is used on other models (only the symbols on the buttons are different). The other buttons surround the display which can be either digital (every menu entry is associated with a LED light lighting when the entry is selected) or LCD (with graphic instructions for correct functioning).

Washing cycles
The first revolution in the industry of this and other household appliances happened with the switch from mechanical to electronic commands. Since years an electronic, computer-like card contains a microprocessor and a given amount of memory. Every time we press a button we command program loading from the memory to the processor, just like when we double-click on an icon to start an application. The card is connected with the mechanical and electrical members through a number of sensors which continuously send data to the processor.
The second revolution – less patent but just as important – has taken place since some years, and has marked the shift from analogical to digital electronics. Some years ago, for instance, water temperature was controlled by a thermostat which turned some heating elements on and off according to the reached temperature. The same happened when controlling motor speed. Once a given speed was reached, the only way to control it was to switch the power off and then switch it on when needed. Since several years, the variables typical of washing cycle, temperature, rotating speed and type of drum movement, are digitally controlled. Even in this case, the power unit consists of a brushless motor with inverter-managed speed control. This solution allows the software to have a total control of drum rotation, allowing the creation of customized cycles which may be even characterized by complex movement sequences. WMD 1044 BX features a stain-resistant cycle capable of combining particular drum movements and digital control for constant temperature and allowing a better enzymatic stain removal without necessarily increasing temperature and running the risk of ruining clothes. The Anty Allergy cycle also features water heating and maintenance at higher temperatures and higher rinsing phases than the standard cycles, in order to remove the main allergens. The general uniformity in the technical, mechanical and electronic choices of the different manufacturers has implied differences mainly related to the software. Manufacturers’ ability to identify the most useful functionalities for consumers emerges by analyzing the different washing options. As for Hotpoint WMD 1044 BX washing machine with LCD display, the software also allows to turn some standard cycles into energy-efficient Eco cycles. Moreover, thanks to My Cycle button, it is possible to save a customized cycle and use it whenever the customer wishes, by clicking on the button.
Even washing dynamics are particularly important and, even in this case, manufacturers have recently conceived a particular design for the drum interior, in order to ensure better results. The particular ribbings which during the past were integrated in the drum are, in this case, made of a plastic material, particularly smooth and wave-shaped in order to facilitate clothes movement without ruining them. They are particularly suitable for clothes with attached elements (such as glitters and sequins), above all given the high rotation speed in spinning phase, even if reached gradually.

The choice of materials
The drum is still made of stainless steel and Hotpoint has reinforced it with titanium in order to improve its resistance and anti-corrosion features. It seems that stainless steel drums are a sort of taboo which cannot be broken, as if they were such a distinctive element that if, by chance, another material were to be used, washing machines would not be perceived as such any longer. Behind the drum, we can find the innovative introduction of components in technical polymers which ensure sufficient resistance with lower noise transmission. In this case, the tank where the drum rotates and which supports the motor, is made of polypropylene reinforced with glass fiber, whose shape optimizes, according to Hotpoint technicians, both resistance and noise damping – helped by three sound absorbent panels. Like the old stainless steel tanks flanged with seals, also the new welded tanks in plastic material ensure – in case of damage – a thorough inspection of the drum bearings.

Beyond tradition
In short, thanks to this model conceived for the Hotpoint brand, Indesit Company wanted to develop a product standing out among the competitors, above all due to some of its functional aspects, such as stain treatment and its removal. At first the product may  seem traditional and reassuring, while introducing design elements proving the strong character of the brand as well as great attention to both production and functioning costs, reaching Class A+++ -10%.  An updated range of washing programs is also offered in order to meet the most modern needs for more and more careful wash as for hygiene and health: neither wi-fi nor USB connections until consumers are ready.