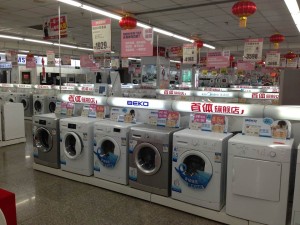 According to GfK Temax, the technical consumer goods (TCG) market in China has increased by 3.2% in the first quarter of 2014 compared to the same period in 2013. The small domestic appliances sector was ranked at the top, with an increase of 33.3%. However, the photography sector declined sharply by 30.7% year on year. In the first quarter of 2014, the growth rate of China’s TCG market experienced a slowdown as a result of the telecommunications sector’s stable development. 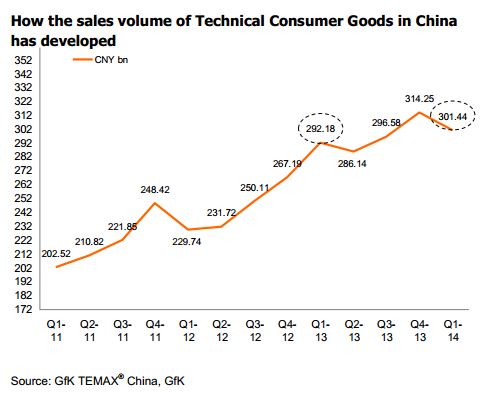 Small domestic appliances: activity across a wide range of products
In the first quarter of 2014, the SDA sector reached ¥9.82 billion, with an increase of 33.3% over the same period last year. Rice cookers performed positively with HI rice cookers being especially popular. During the Spring Festival, new models were introduced and were in great demand. It is apparent that HI rice cookers will become a mainstream trend, which will bring activity to the medium and high-end markets. Other products also recorded good performances due to the New Year sales season.
*Air conditioning has been excluded from the SDA sector and figures have been reworked for previous years.

Telecommunications: growth slowed down
In Q1 2014, overall sales in the telecommunications sector reached ¥152.9 billion, a rise of 7.5%, compared with the same period in the previous year. The mobile phone market experienced a slowdown in its growth rate, however, online sales increased. After the virtual operator licenses were issued, investment was increased in the electronics business. Online channels will become an important strategic area in China’s mobile phone market in 2014.

Major domestic appliances: driven by industry upgrades
The sales value of the MDA sector was ¥34.53 billion in Q1 2014. Its growth rate was 5.9%. Washing machine manufacturers continued to upgrade their products, and drum washing machines accounted for 39% of the market. The overall refrigerator market rose slightly, while both the rural and suburban markets showed a year-on-year decline. Because of the rapid development of online sales channels, the market size in the microwave ovens segment in urban areas continued to narrow.

Office equipment: smooth development
The OE sector achieved ¥3.86 billion in Q1 2014, an increase of 1.2% year on year. The printers market was in a period of channel adjustment. On the one hand, offline retailers continued to operate in “lower-tier” cities. On the other hand, the growing online platform seized more of the market share.

Information technology: new products for web books
In the first quarter of 2014, the IT sector achieved ¥51.05 billion, decreasing by 0.7%. In the web book market, manufacturers introduced new products and, as a result, sales were in good shape. At the same time, they focused on upgrading their products in the face of the competition. The weak performance of notebooks and desktops contributed to the lack of recovery. Compared to last year, mouse and keyboard products, designed for the gaming market, and web books, gradually improved as average prices rose.

Consumer electronics: negative growth in Panel TVs segment
In Q1 2014, the market size of the CE sector was ¥44.53 billion, declining by 7%. The Panel TV market still showed negative growth despite the introduction of new models and the use of sales promotions. The consumer demand for camcorders declined rapidly, even on online channels where demand is dropping year on year.

Photography: accelerated decrease
In Q1 2014, the value of China’s photography sector amounted to ¥4.75 billion, a decrease of 30.7%. Compact digital cameras reported a gloomy performance, which was the main reason for the overall decline in the photography sector. However, consumer demand for CCD cameras was positive.