January edition of ZVEI Business Cycle Report shows the trend of German E&E industry in November 2014. If turnover and foreign orders grew compared to the same period of last year, production was quite similar to previous year level. For 2015, the business climate is positive. Here below the report in detail.

Decrease in domestic and increase in foreign orders
In November 2014 the German electrical and electronic industry has received 1% less new orders than a year earlier. Domestic bookings fell by 5.7%. In contrast, new orders from abroad rose by 3.3% (year over year). The plus was mainly driven by an increase in bookings from euro zone customers by 7.7%. However, new orders from third countries only picked up by 0.9%. In the full time period from January through November of last year new orders have slightly exceeded their pre-year level by 0.5%. Here domestic and foreign bookings went up by 0.2% and 0.8%, respectively. Euro area clients ordered 3.1% more than a year before, whereas customers from non-euro zone countries ordered 0.4% less. 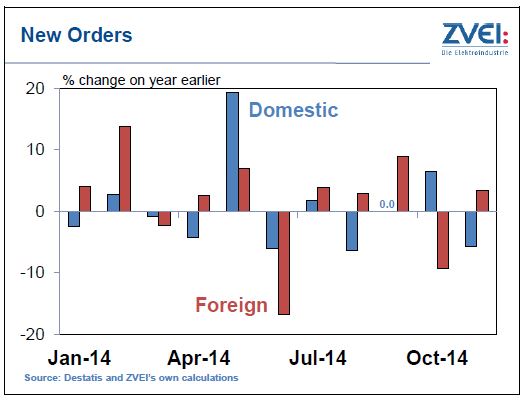 Production more or less unchanged
Real production – adjusted for price – of the E&E industry’s firms has more or less been unchanged in November 2014. It fell insignificantly by 0.2% (year on year). During the entire period from January through November of last year the sector’s output has grown by 2.4% (again year-on-year rate). Below the line, the production plans of the domestic E&E Industry’s companies have not changed at all in December 2014. 9% of the firms intend to raise their output in the next three months to come. 80% of the companies want to maintain their current production level and 11% plan to cut it down. 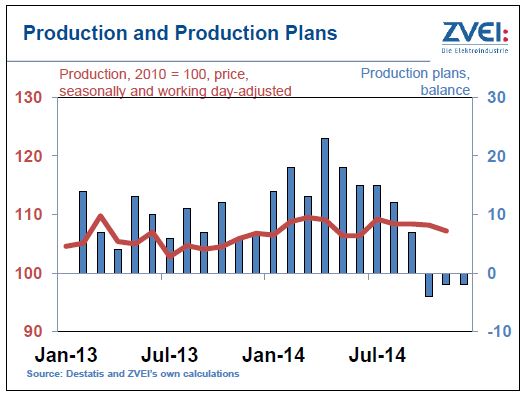 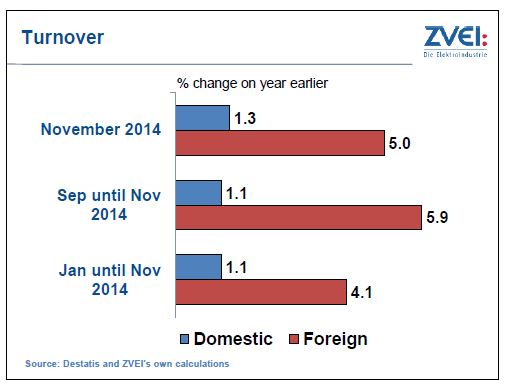 Positive business climate
After its small increase already in November, the business climate within the German electrical and electronic industry has returned to its August level in December 2014. 31% of the companies evaluate their present situation as good, 57% as stable and 12% as bad. At the same time, 21% of the companies reckon with rising businesses in the next six months ahead. 70% and 9% of the firms expect stable and declining activities, respectively. 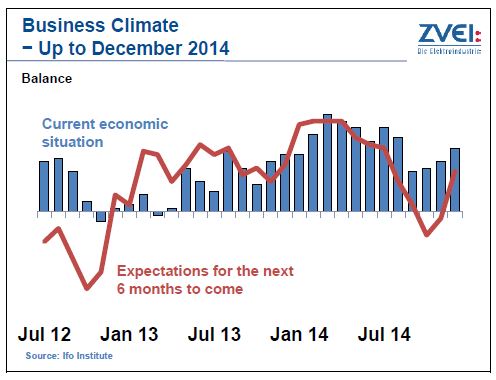