According to GfK Temax, in the second quarter of 2015 the Western European technical consumer goods market generated sales of around €46.2 billion. This corresponded to 2.3 percent growth, compared to Q2 2014. The key driver was the telecommunications market which reported double-digit growth. With regard to individual countries, sales development was largely positive, with the exception of the bigger markets – France, Germany, and the UK – which faced minimal falls in sales volumes.

Small domestic appliances
The positive sales trend in the Western European market for SDA continued in the second quarter of 2015. Compared to the same period in 2014, the sector grew by 8.9 percent, up to €3.4 billion. All countries, except Portugal and Finland, contributed to this pleasing result. A substantial contributor was the rising demand for products from higher-priced classes. The majority of new appliances with an A energy efficiency rate was sold within those higher price bands. 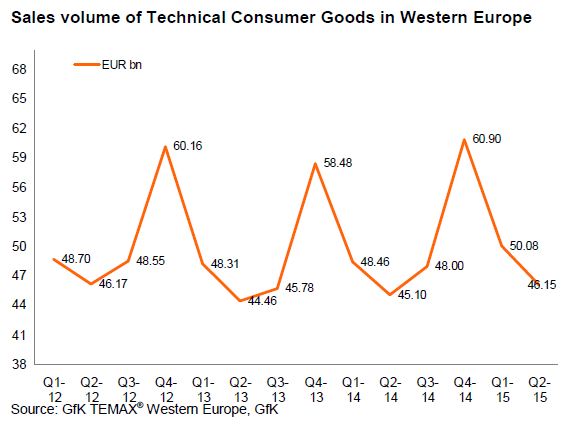 Major domestic appliances
European MDA market increased its sales volume by 6 percent. The total sales volume generated between April and June was €7.6 billion. All product groups contributed to this result. Tumble dryers, in particular, were in demand and again saw double-digit growth. Prices for free-standing appliances remained stable, while the built-in segment registered a slight price fall of 1 percent, compared to Q2 2014.

Telecommunications
The Western European telecommunications market generated total sales of around €11.5 billion between April and June 2015. This corresponded to a growth rate of 15.2 percent, compared to Q2 2014. In particular, demand for smartphones increased – especially for those with screens between 4.5 inches and 5.5 inches, a thin body (less than 8mm), and premium camera features (more than 12 megapixels for the main camera). It is becoming more prevalent for smartphones to have sports/fitness and health tracking sensors.

Office equipment and consumables
Despite last year’s successful second quarter, aided by strong sales in the beamer segment in the course of the 2014 FIFA World Cup, the Western European market for office equipment and consumables grew in the second quarter 2015 by 0.8 percent, up to €4.3 billion. While most of the Western European countries reported healthy growth in sales volume, the Dutch and the Greek markets experienced significant declines. The continued improvement in sales of the small photo printer was remarkable. A few years ago, this product seemed doomed to disappear.

Information Technology
In Q2 2015, the Western European IT market faced a sales decline of 2.2 percent, down to €12 billion. The only growing markets were those in Austria, France, Greece and Spain. Driven by the release of Windows 10, more demand is expected for computing devices in the second half of 2015. Especially innovative devices like convertibles and computing tablets will be sought by consumers.

Photography
The Photography product groups generated sales volume of around €1.4 billion in Q2 2015. This corresponded to a decline of 7.1 percent, compared to the same period of the previous year. However, demand for several types of high-quality cameras – those which provide added value, compared to smartphones-based photography – continued to grow. In particular, compact system (mirrorless) cameras and high-end, fixed-lens cameras were successful.

Consumer electronics
In Q2 2015, the Western European market for consumer electronics generated sales of about €5.9 billion. Compared to the great results in Q2 2014, the market declined by 12.5 percent. Because of the impact of last year’s FIFA World Cup, a fall had been anticipated, but less so. Positive developments were seen in the high-resolution 4k/UHD TVs segment, as well as in the connected audio and wireless speakers, and action cams segments.