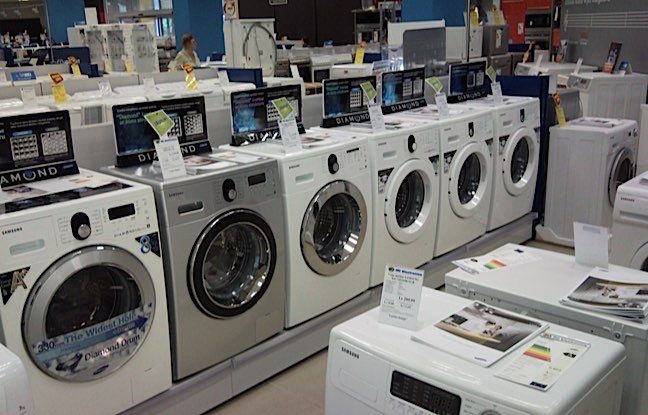 In the third quarter of 2015, the Western European technical consumer goods market grew by 3.1%, compared to Q3 2014. According to GfK Temax, sales between June and September 2015 amounted to around €49.4 billion. With the exception of consumer electronics and photography, all sectors contributed to this positive result. On an individual country level, sales development was largely positive in most markets, except for Greece and Portugal, which registered significant decreases in sales volumes. Here are the data and comments of GfK Temax.

Major domestic appliances
The Western European major domestic appliances market was again in good shape in Q3 2015, generating a sales volume of roughly €8.4 billion. This corresponded to a growth rate of 5.1%, compared to the same period a year ago. Supported by continuously shrinking prices, appliances with A+++ energy labels grew. Additionally, smart home technology offered great potential for washing machines and refrigerators. However, at the moment, sales of these products are at a very low level. 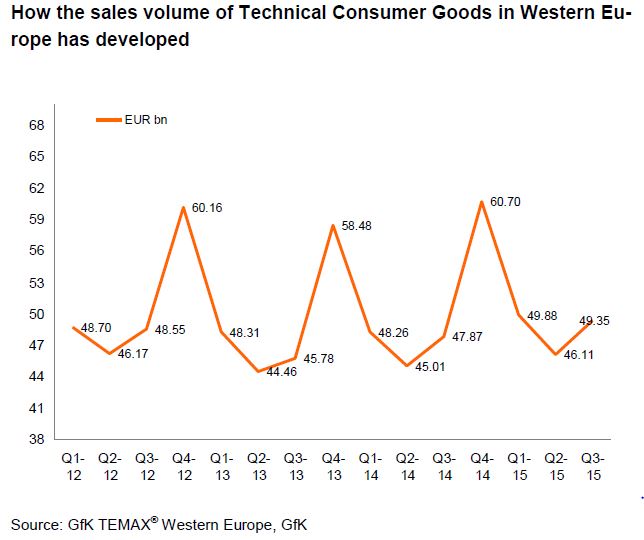 Small domestic appliances
In the third quarter of 2015, sales in the Western European market for small domestic appliances grew by 7.4%, compared to Q3 2014, up to €3.6 billion. With the exception of Portugal, Greece and France, all countries witnessed positive development. The food preparation equipment segment strongly influenced this result. Sales of liquidizers grew significantly and became the biggest sub-segment in terms of value, followed by the kitchen machines segment. Also, the low-oil/hot-air fryers categories reported considerable growth.

Telecommunications
The telecommunications market in Western Europe ended the third quarter of 2015 with sales growth of 8.6%, compared to Q3 2014. The total volume generated between June and September stood at roughly €12.1 billion. Development in the different countries was widely positive: only Denmark and the United Kingdom reported a fall in sales. In particular, demand for smartphones increased, especially for those with screens between 4.8 inches and 5.5 inches (which has become the standard screen size). In Q3 2015, 60% of all devices costing between €150 and €250 came with a large screen, compared to 20%, one year ago. 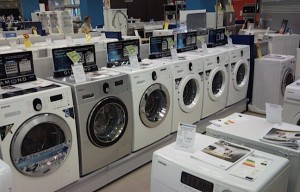 Office equipment and consumables
In the third quarter of 2015, the office equipment and consumables market in Western Europe generated sales of about €4.3 billion, which corresponded to a growth rate of 2.3%, compared to Q3 2014. Countries reported mixed sales volume growth, ranging from double-digit growth in Sweden to a significant fall in Greece. Laser MFDs (multi-functional devices) again showed a very positive trend, with laser color appliances driving the market. The accessories segment took advantage of that trend and growing sales of cartridges were registered.

Information technology
The Western European Information technology sector generated a sales volume of €13.2 billion in Q3 2015. This corresponded to a growth rate of 1.6%, compared to the same quarter in 2014. Development on an individual country level was mixed. New products – specifically, mini/stick PCs and nettops, as well as convertibles and tablet computers – generated significant growth among consumers. These new products, combined with fashionable cloud computing hybrid storage solutions, will become more and more popular to ensure mobility and connectivity in a multi-device environment.

Photography*
The photography sector generated a sales volume of around €1.4 billion in Q3 2015, a 4.8% decrease on the sales recorded in Q3 2014. Only Denmark achieved a positive growth rate. Despite this, demand for high-quality cameras continued to grow. In particular, compact system (mirror-less) cameras and high-priced fixed-lens cameras were successful. Also, the full-frame sensor format contributed positively to the overall value trend.
*Photography includes digital cameras and photography accessories. Due to a change in digital camera reporting (camera kits are no longer split into separate cameras and lenses products, but are reported together), data has been reworked for the photography sector.

Consumer electronics
In the period July-September 2015, the total sales volume of the Western European consumer electronics market amounted to about €6.3 billion. This corresponded to a decline of 5.5%, compared to Q3 2014. The market for TVs in Europe is facing a challenge because replacement cycles for flat-screen TVs have increased to more than 8 years. Innovations, such as smart TVs or ultra-high definition (UHD) TVs, will need to be marketed strongly to convince consumers to buy a new TV. Audio products performed well as sales of smart audio and wireless speakers reflected the increasing consumer demand in this area.