Overall, the Belgian TCG market stabilized in the third quarter of 2015, but the consumer electronics and photography sectors continued to struggle. Also, for the first time, a fall in the Belgian sales of smartphones was registered. However, the telecommunications market in general continued to grow. The Information technology sector improved, thanks to the business channels. Both the small and the major domestic appliances sectors also contributed positively. Here are the data of GfK Temax.

Small domestic appliances
During the third quarter of 2015, growth was registered in the SDA sector. Although the overall results were (modestly) positive, several segments suffered in Q3. Kitchen appliances performed well in this quarter, driven mainly by the food preparation equipment segment, which includes products like kitchen machines, hand blenders and liquidizers. One product group that disappointed was hot beverage makers: sales fell in this segment for the first time in a while. 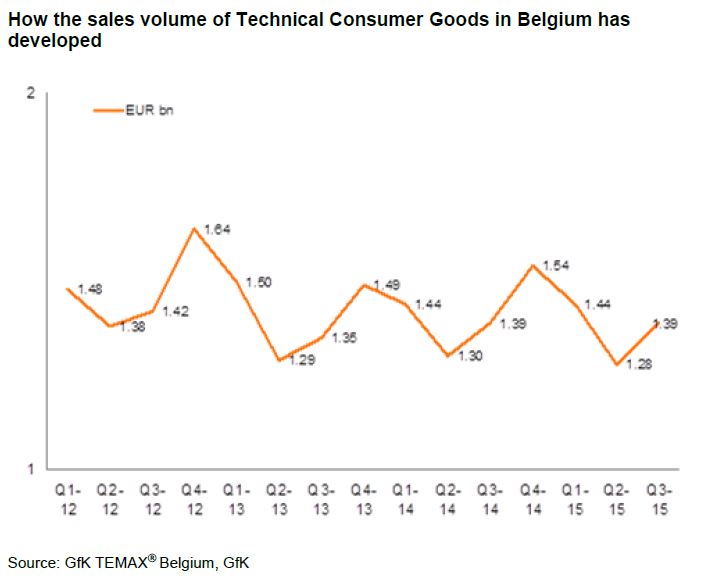 Major domestic appliances
The market for major domestic appliances continued to expand. Furthermore, most categories experienced a slight increase in average prices. After a first half year with booming sales, the washing products segment quietened. This was despite an undiminished rush for heat pump tumble dryers, driven by plummeting prices.

Telecommunications
For the first time ever, there was a downward trend in sales of smartphones in the Belgian market with 3% fewer devices sold in Q3 2015, compared to Q3 2014. In the mobile phone accessories market, the chargers boosted the segment. Sales of core wearables increased with health and fitness trackers, smart-watches, and wrist sport computers now available in all sizes, weights, and price ranges. Increasingly, this is becoming more like a fashion business with good-looking devices and trendy designs.

Information technology
In Q3 2015, turnover in the IT sector amounted to 394 million euro, an improvement of 1.2%, compared to Q3 2014. The market for IT products was able to show growth figures again during Q3, thanks primarily to stronger demand from business users, especially in the desktop computing category. Sales of mediatablets continued to fall at a rapid pace. Consumers switching to smartphones, combined with a longer replacement cycle for these type of products, had a negative effect on overall demand. Positive development was noted in some product categories, including monitors, Internet Protocol (IP) cameras, and networking solutions.

Office equipment and consumables
Turnover in Q3 2015 amounted to almost 107 million euro, a slight decrease of just under 1%, compared to Q3 2014. The cartridges category returned to growth, while hardware products continued to decline.

Photography
The third quarter of 2015 showed a decline in turnover of close to 14%. The category which was impacted the most was the entry-level, fixed-lens cameras segment with price points of under 150 euro. Demand for these types of product declined at an increasing pace. Growth within this sector came from the compact system models and the interchangeable lenses segments.

Consumer electronics
In Q3 2015, docking/mini speakers, network music systems and soundbars showed a positive trend with an increase in volume, as well as in value, compared to the same quarter of the previous year. In particular, docking/mini speakers were very popular with some strong sales during the summer months of July and August. This resulted in a turnover uplift of almost 30% in Q3 2015, compared to Q3 2014. Less positive was the ongoing decline of the TVs market. Finally, the strong performance of the action cams segment should be mentioned. 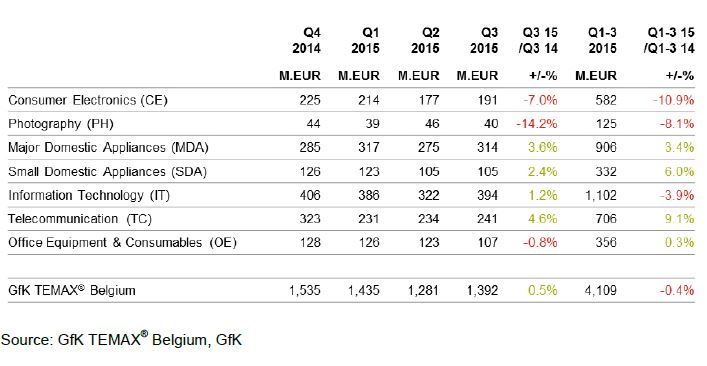