In the May edition of the “Business Cycle Report”, the Zvei association has published the trend of the German electrical and electronic industry in March 2016 and in the first quarter of the year. Here are the results in terms of new orders, production, turnover and business climate.

New orders
In March 2016 new orders in the German electrical and electronic industry were 12% down on their pre-year level. However, the huge decline is mainly due to a base effect, since there had been a lot of bulk orders in March 2015. Thus, the year-on-year comparison is starkly biased now. Domestic and foreign orders fell by 19.5% and 4.8% in March of this year, respectively. Bookings from euro zone customers decreased by 3.9%, and new orders from third countries missed their pre-year level by 5.4%. In the full first quarter of 2016 the sector’s new orders decreased by 3.2% (again year over year). Here domestic and foreign bookings dropped by 5.8% and 1.1%, respectively. Euro zone clients reduced their orders slightly by 0.2%. Customers from non-euro area countries booked 1.6% less than a year earlier. 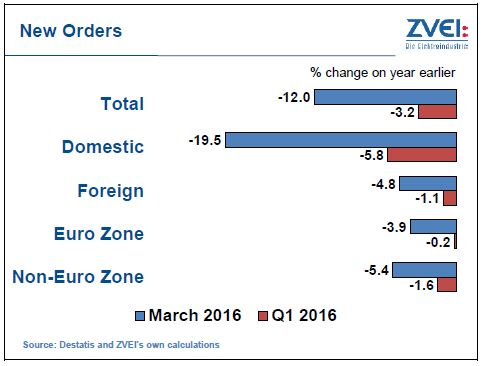 Production
Production – adjusted for price – failed its pre-year level by 2.8% in March 2016. It should be noted that Easter was already held in March this year. Accumulated from January through March the sector’s output picked up slightly by 0.4% (yoy). The capacity utilization ratio within the domestic E&E industry has risen again at the start of this year’s second quarter. It picked up by almost one %-age point from 82.6% to 83.5% of the normal full use level. Eventually, the companies have lifted their production plans again somewhat in April. 19% of the firms intend to raise output in the next three months to come, and only 5% plan to reduce it. The rest is going to maintain the current production level. 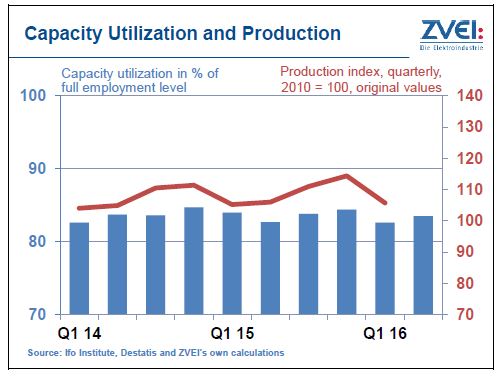 Turnover
With 15.7 billion euro, sales of the German E&E industry’s companies were down by 1.9% from a year ago in March 2016. Domestic sales fell slightly by 0.5% to 7.5 billion, foreign sales decreased by 3.1% to 8.2 billion. With it, turnover with clients in the euro area picked up by 5% to 3.3 billion, whereas sales to customers from third countries declined by 7.3% to 4.9 billion. In the full first three months of this year the sector’s sales came to 43.1 billion and, therewith, exceeded their respective pre-year level by 1.4%. Here an increase in domestic turnover by 3.3% to 20.8 billion and a slight decrease in foreign turnover by 0.2% to 22.3 billion faced each other. While sales to euro zone customers rose by 3.7% to 8.8 billion, sales to third countries suffered a loss of 2.5% to 13.5 billion. 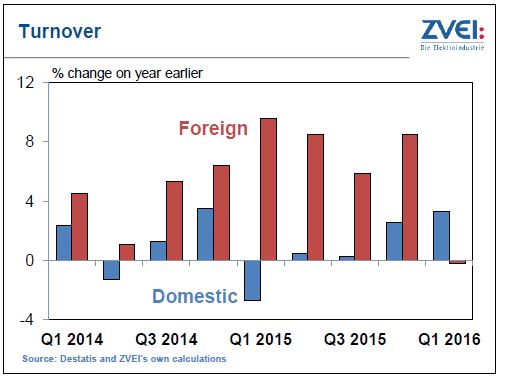 Business climate
After three consecutive declines the business climate in the German E&E industry has improved again somewhat in April of this year. Both the assessment of the current situation and overall expectations for the next six months to come changed for the better compared to March. 32% of the sector’s companies evaluate their present economic situation as good, 57% as stable and 11% as bad. Regarding the look ahead, the balance out of the firms’ positive and negative expectations increased markedly in April from 4 to 10 %- age points. The export expectations continued to slightly fall further. 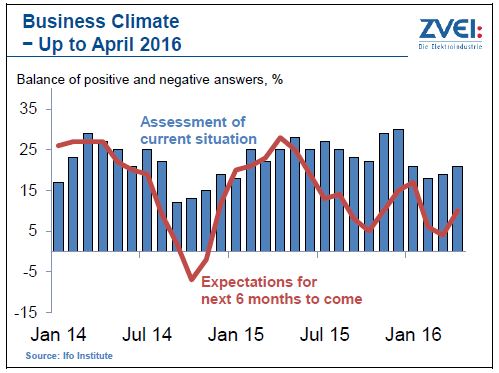