As reported by IFR (International Federation of Robotics), China wants to make the leap into the Top 10 of the world’s most intensively automated nations by 2020. By then, its robot density is targeted to rise to 150 units – this being the number of industrial robots per 10,000 employees (2015: 36 units). The aim is to increase annual sales of domestically produced industrial robots to 100,000 units by 2020. This goal was declared by Wang Ruixiang, President of the China Machinery Industry Federation, speaking at the “China International Summit of Robot Industry” in Shanghai. Considering the robot density, China is currently ranked 28th in the world. The Chinese market for industrial robots continues to be strongly influenced by imports. Foreign manufacturers make up a market share of 69 percent. However, domestic competitors are currently increasing their market share significantly. Within two years, the sales volume posted by Chinese manufacturers has risen from 25 percent in 2013 to the most recent figure of 31 percent. The Beijing government is promoting the rapid expansion of automation, through its reform agenda entitled “Made in China 2025”. Asia registered the world’s highest sales figures for 2015; at 156,000 units this represented a rise of 16 percent in comparison to the previous year. The region’s largest individual markets were China (67,000 units), followed by South Korea (37,000 units) and Japan (35,000 units). The five markets of China, South Korea, Japan, the USA and Germany account for around three quarters of global robot sales. 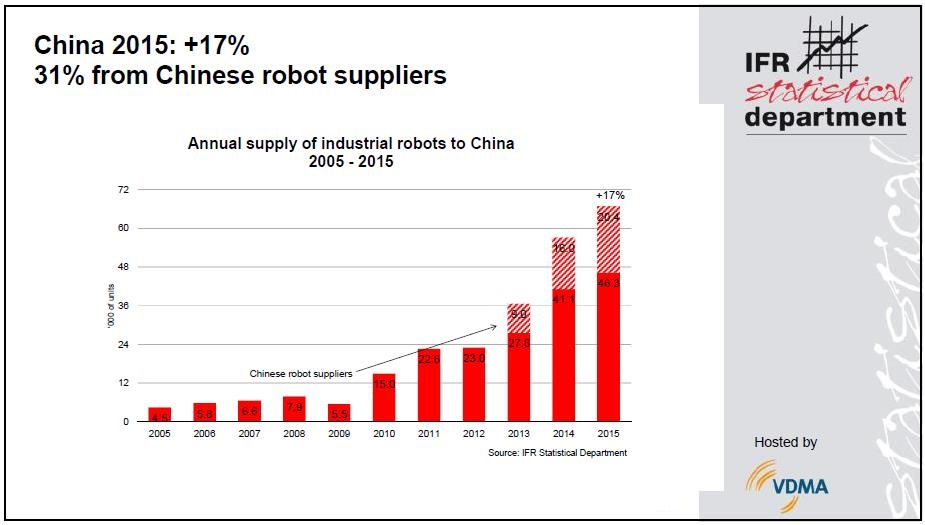