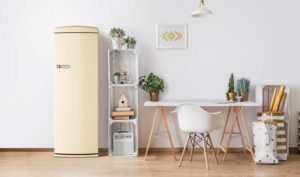 Candy has launched DIVO, the new line of refrigerators that expresses the founding values of the brand: user-friendly products, functionality, design and Italian style. This is also emphasized by the role that the refrigerator had during the “Miss Italia” beauty contest. Candy was the Official Partner of the famous competition. The DIVO refrigerator was placed in the loft that hosted the 30 semi-finalists; besides among the participants of the contest Miss Candy was elected, who represented the sponsor during “Miss Italia” and will represent it in the period after the show. Candy DIVO is available on the market in three colors (red, cream and white) and in three versions (double door, single door and tabletop). It guarantees a large capacity: 311 liters for the single door refrigerator, 304 liters for the double door refrigerator and 124 for the tabletop version, which is distinguished by a double balcony, which exploits an additional space obtained in the door to store foods and drinks. The design is characterized by rounded shape and elegant finishes, such as the chrome handle and the bright colors. DIVO has an advanced ventilation system and is in A++ class.