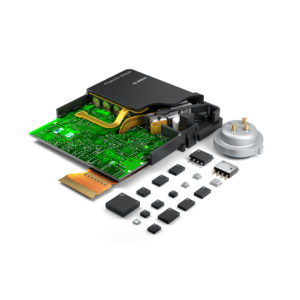 Having been making semiconductors for more than 45 years, Bosch today is one of the world’s leading manufacturers of chips for mobility applications. The global semiconductor market is worth billions: the market research company Gartner expects global semiconductor sales to reach 451 billion dollars in 2018. By 2019 alone, the market will have grown at an annual growth rate of more than 5 percent (source: PwC). “The Bosch semiconductor business is growing faster than the market”, Jens Fabrowsky, member of the executive management of Bosch’s Automotive Electronics division, says. In the semiconductor market, the ultimate discipline is making chips for vehicles. Bosch has been making vehicles smart since the 1970s, when it started equipping them with its application-specific integrated circuits (ASICs). Bosch holds over 1,500 patents and patent applications for engineering and manufacturing its semiconductors. Bosch’s current semiconductor portfolio focuses on microelectromechanical systems (MEMS), ASICs for vehicle ECUs, and power semiconductors.
Besides, as a key technology for the IoT, Bosch semiconductors have applications that extend far beyond the world of vehicles. The company’s sensors can be found in smartphones, fitness trackers, drones, game consoles, and smart home applications. When it comes to MEMS sensors, Bosch – as the company explains – is both a pioneer and the world’s leading manufacturer. More than 20 years ago, the supplier of technology and services itself developed the microfabrication technique, known worldwide as the “Bosch process,” used to make these semiconductors.
Bosch is underpinning its growth strategy for semiconductors with the single largest investment in the company’s history: it is putting some one billion euros into a new wafer fab in Dresden, which will manufacture 300 mm wafers. Following a rollout phase, pilot manufacturing operations are expected to start at the end of 2021. Compared with conventional 150 and 200 mm wafers, 300 mm wafer technology offers greater economies of scale. Up to 700 associates will be involved in the highly automated chip manufacturing process, working to plan, manage, and monitor production. After Reutlingen, the Dresden plant will be Bosch’s second wafer fab in Germany. With it, the company aims to expand its manufacturing capacity, and thus to further boost its competitive edge in global markets.