In the NeoTank by Insinkerator, the new electronic thermostat, with front touch controls, features an extraordinary temperature regulation precision. 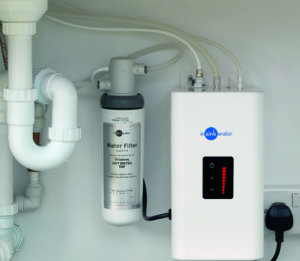 The NeoTank by Insinkerator is a concentrate of technology and performance, besides electronics and high-quality materials like stainless steel used for the tank. In the kitchen, it becomes a useful instrument on several occasions, it in fact allows preparing quickly very hot drinks like teas, herbal teas and American coffee (with a capacity of 100 cups delivered in one hour), it permits to sanitize baby bottles or teats, to facilitate the cleaning of very dirty cutlery but also to annul water boiling times to prepare, for instance, a dish of pasta.
Improving the water temperature regulation was the main target of this new version, updated also in the aesthetics, in colours and in the bodywork shape, to make it even more compact and less cumbersome (sizes are 157x2016xH310 mm). Despite its positioning under the sink, in fact, today the tank is reviewed also in its formal aspects, to convey a more elegant and essential look with the open shutter. The white bright finish and the practical touchscreen display, which assures a simplified regulation, confer a modern and refined image to it.
However, the focus remains the temperature regulation and precisely for this reason the tank evolution pursues a fully electronic control, as Herbert Allegranti, Brand Manager for Italy of Insinkerator, tells us: “The will, as well as the requirement, was shifting to a more sophisticated solution in the temperature adjustment, as well as to a version with more modern and elegant bodywork, even if its normal arrangement clearly remains half-hidden under the kitchen sink. The new electronic thermostat, with front touch controls, features higher regulation precision of the temperature (0.5°C) compared to the previous manual version”.
Therefore, a precision instrument that controls a quite simple process according to which a thermostat operates a resistance that heats the water contained in the 2.5-litre tank and deactivates it when the highest temperature is reached. When the water in the tank reaches the required temperature, included between 88°-98°, the resistance is automatically switched off and the consumption will drop to 40 watts, therefore absolutely reduced. 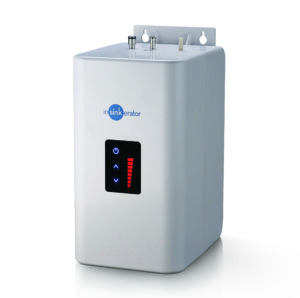 Energy saving, performances and utmost safety that, like for all systems by Insinkerator, have been subjected to severe lab tests (including one of the major certifying bodies, UL) to test the product for trade on American and European markets, thorough the standard EC certification. The NeoTank, thanks to its better thermal insulation and the design revised in its whole, can then stand out for a higher energy efficiency than in the previous version, both when the machine is in stand-by and during its operation at full rate.
The tank/boiler is easily installed and does not need particular maintenance but a softening plant “upstream” the domestic water plant is anyway suggested, especially in presence of hard and/or calcareous water.
NeoTank is conceived “to work” in synergy with the new 4N1 Touch dispenser, still by Insinkerator, an advanced product able to release a flow of cold and boiling water (at a temperature close to the ebullition one) or filtered water, just touching a key comfortably positioned on the bottom, on the dispenser.
Obviously, Neo Tank can be also installed on an Insinkerator dispenser of old generation, as well as on all Hot Water Tap versions.

Preventing a needless waste of resources