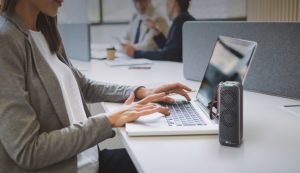 LG Electronics announced its filter-type portable air purifier designed for use on-the-go. With an innovate PM1.0 Sensor, the compact and cord-free LG PuriCare Mini helps deliver safe, clean air in the car, a baby’s nursery or even one’s office. With its 4-Step Air Filtration System, the product can detect and remove 99 percent particulates as small as 0.3 μm. The first step involves the PM1.0 Sensor which quickly and accurately detects the quality of the air before the Dual Inverter Motor forcibly draws in the air at 5,000rpm in the second step. In step three, the high-efficiency Total Allergen Removal filter removes particulates in the air and in the final step, the powerful Twin Tornado Dual Fan disperses the clean air far and wide. Similar in size and weight as a 500 milliliter bottle of water, the wireless portable air purifier freshens the air for up to 8 hours at low speed or 2 hours at the highest setting on battery power alone. PuriCare Mini uses a durable filter which lasts up to 2,000 hours or six months if used 12 hours a day. The free LG ThinQ app for both Android and iOS devices allows users to monitor the condition of the filter, check the battery status and control their LG PuriCare Mini via Bluetooth with a smartphone or tablet.