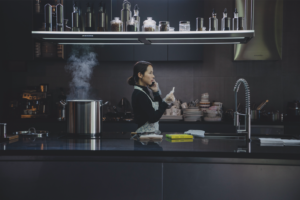 Two Falmec hoods, Lumen Island 175 and Altair, appeared in “Parasite“, the four Oscar awards-winning movie by the Korean director Bong Joon-ho. Within the setting of a rich villa in Seoul, design has played a fundamental role in characterizing the atmosphere, tastes and social status of the characters. Positioned in the center of the room, Lumen Island 175 houses containers and cans along its entire structure in stainless steel: its expressive power is enhanced by the LEDs on both sides. Altair is a 60 cm “monobloc” in stainless steel, installed alongside the wall units that make up the rest of the kitchen. The appliance features a LED lighting system located in the lower part of the hood. “Thanks to our Korean partner Maxtime – the company explains – Falmec stands out in numerous scenes with two of its hoods featuring in the magnificent kitchen: namely the Lumen Island 175 and Altair from the Design collection”.

Hitachi dialogues with the world of architecture and design