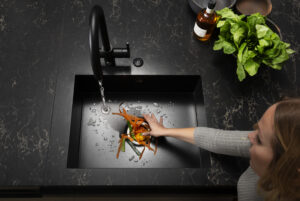 At this time, the impossibility of having lunch or dinner out transforms the kitchen into an increasingly lived-in place in which to share moments with the family members respecting everyone’s safety and the environment. To support these needs in a sustainable way, InSinkErator, a brand of the Emerson Group that created its domestic garbage disposer more than 80 years ago, suggests three anti-waste phases. The first proposal is to join the European Week for Waste Reduction which, from 21 to 29 November, promotes sustainability and proper waste management. It is possible to make a post or a video and share it on social networks by tagging InSinkErator which will give it even more visibility. The second phase concerns the savings vademecum. InSinkErator offers a vademecum to optimize the resources, preserving food in the best possible way. For example, the company recommends separating fruits such as bananas, avocados and peaches from other foods because by releasing ethylene they favor the maturation of surrounding foods. Finally, it is also important to consider the disposal of leftovers because food waste that ends up in landfills produces methane, a gas more harmful than carbon dioxide, as evidenced by InSinkErator. One possible solution is the domestic garbage disposer that shreds the leftovers until a semi-liquid stage and eliminates them through the sink. The use of this appliance is spreading: according to the data communicated by InSinkErator, in the United States 50% of families own one, in New Zealand 34% and in Australia 20%.

Samsung tells how AirDresser was born

The problem of online counterfeiting and a possible solution