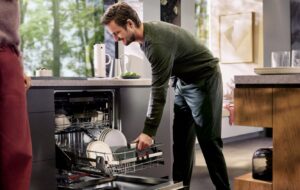 As a founding member of the 50L Home Coalition, Electrolux has contributed with its expertise to create the white paper “A Circular Water Future” aimed at influencing institutions and authorities to re-evaluate water use policy around the world. The white paper is the first document to be published by the 50L Home Coalition. It outlines the role of water reuse in helping to preserve water and move toward the visionary objective of 50 liters of daily water use per person in the long term, with a specific focus on China, India, Mexico and the United States. The document highlights that the current average daily water use per person in some cities such as La Rioja (Spain) and Denver (USA) is as high as 400 and 538 liters respectively. In response, the white paper advocates more circular water use at all levels by promoting a culture of innovation and partnerships, awareness and desirability, and adaptive planning and policy. “As a manufacturer of water-efficient dishwashers and washing machines, we have a key role to play in helping people to use less water in their homes – as well as promoting water efficiency in our operations – the company explains -. Raising awareness of the benefits of modern and efficient appliances is key. For example, the average dishwasher is four times more water efficient than washing by hand per place setting according to research. Dishwashers also use around a third of the energy and save significant time for consumers”.

Whirlpool named one of America’s Most JUST Companies for 2022