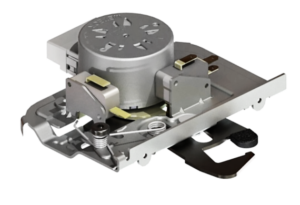 Among the products realized for the cooking sector, Meteor proposes the horizontal door latch. The device is developed for built-in ovens and cookers (for domestic use) that utilize the pyrolytic cycle, with temperatures of up to 480°C, to automatically clean the oven. “International regulations – the company says – prescribe that during this cleaning process the oven door should be locked with a device called latch. Meteor, by utilizing its own gear motor, has devised an innovative system called Lip Type that detects the door position when closed and locks the door during the pyro cycle. A modern device that easily adapts to different oven structures and capable to respond all requirements related to door closing and oven door locking”. The device presents a compact structure entirely made of steel and the door detection function is integrated in the hook. “This – the company adds – allows: to better monitor the door closure, because it allows more precision in the axial tolerances of the oven door with the latch hook; to reduce assembly line; and to reduce costs of the wiring dedicated to the door detection switch positioned separately to the door latch”. Besides, the system allows emergency door opening in case of oven malfunction during the clean cycle and it is possible to position the latch immediately behind the oven front. Finally, the Meteor latch allows quick and effective test of the self clean cycle of an oven directly on the oven assembly line.