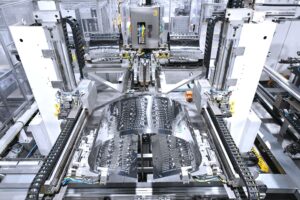 LG’s home appliance manufacturing plant in the United States has been selected as a Lighthouse Factory by the World Economic Forum (WEF). “The million-square-foot factory in Clarksville, Tennessee – the U.S. production base for LG’s award-winning washers and dryers – is the industry’s first home appliance plant in the United States to join the WEF’s global network – the company explains –. Also, it is the company’s second Lighthouse Factory, following on the heels of the LG Smart Park in Changwon, South Korea, which was selected by the WEF last year”. LG’s factory in Tennessee utilizes advanced digital technologies from AI and big data to IoT and robots. Completed at the end of 2018, the facility now operates three production lines for front-load and top-load washing machines and dryers. With an annual production capacity of 1.2 million washers and 600,000 dryers, the plant proactively responds to changing North American demand through local production. More than 900 people work at the LG home appliance factory in Montgomery County, Tenn. “Featuring a complete integrated production system streamlined process to supply impeccable products to customers on time, each line carries out the entire manufacturing process of new models from making the parts to assembly and packaging – LG says –. The LG Tennessee factory boasts a fully autonomous logistics system with 166 automated guided vehicles (AGVs) that transport parts around the plant. With three times more AGVs than the LG Smart Park, these robots improve overall productivity by freeing up people for other tasks. With the integration of parts production such as metal press processing, plastic injection molding, and painting – including LG’s own intelligent injection molding system – the company has increased component productivity by 21 percent. In addition, the plant recognizes and responds in advance to potential productivity issues through an advanced detection system. By applying data-based AI technology that accurately predicts washing machine performance, the number of tests and energy consumed during testing are reduced by 22 percent, while the defect rate has been reduced by more than 61 percent via quality optimization”. The plant is also maximizing workplace safety and operational efficiency by using robots for complicated, potentially dangerous tasks, such as assembling and lifting heavy parts and welding. Besides, to further improve efficiency, LG plans to establish a 5G connectivity network across the facility in the second half of this year, creating an environment where its many AGVs can transport materials faster and more accurately based on stable, uninterrupted communication. LG will also introduce Autonomous Mobile Robots that navigate the expansive facility with ease to enhance its logistics system. The commitment to sustainability can be seen throughout the Tennessee factory, which transitioned to renewable energy completely already in 2022.