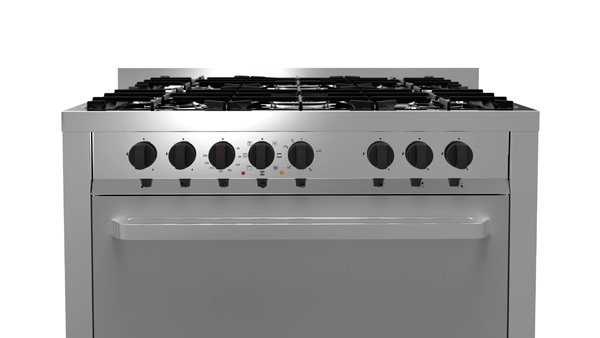 More and more amateurs are putting themselves to the test in cooking. Bompani had them in mind when decided to re-design the freestanding Class cooker line by Bompani.

They were once considered as mere replacement products, or even as a second-choice solution for the holiday home, and played a minor role if compared to those which were harmoniously included in the built-in kitchen furniture. Nowadays, freestanding cookers are interestingly successful. This is due to a variety of reasons: the new way of conceiving home spaces, where service areas like kitchens are getting more and more “socially” important if compared to the past, and require the presence of household appliances which are increasingly outstanding as for design and performance. As for both design and performance, freestanding products have undoubtedly much to say. Consumers’ new desire for home conviviality and for putting themselves to the test in cooking is not to be forgotten: these two trends bring to an in-depth analysis and focus on the search for the most suitable product to meet the new need for food cooking. Freestanding cookers seem capable of being included in this context thanks to the investments by the companies which have enriched their product offer through devices that have their own esthetic value and higher performances than the past. Freestanding cookers as “replacement” household appliances are turning into first-choice products, whose value places it in the core of the kitchen environment.

THE IDEA
The re-designing operation of the Class freestanding cookers by Bompani, a well-known Italian brand for household appliances, is in line with such premises. “Class is conceived as a high-end line – says Raoul Battilani, designer and communication manager at the company – and is inspired by professional kitchens of famous Chefs. The idea was to create an autonomous and independent product capable of combining aesthetic creativity and technical innovation, ergonomics and functional capacity, ensuring outstanding cooking results in total safety”. The company wanted to conceive a product especially for “amateurs who, in the privacy of their homes, wish to express their creativity as it happens in restaurants”. The aesthetic value of the product had to be combined with high cooking efficiency to amplify the pleasure of experimenting new recipes and of cooking for their guests. The whole operation is totally included in the new concept of kitchen considered as an assembly of autonomous and independent modules, which today seems to be an interesting alternative to the traditional built-in solutions.

THE CONCEPT DESIGN
The new Class line by Bompani is characterized by elegant and refined shapes, covered with materials, such as shiny stainless steel and tempered glass, which are reliable over time and of outstanding aesthetics. “The Concept design had to perfectly meet the modern needs of rationally organizing the spaces. This is the reason why cookers have been designed in three measures, 90, 70, and 60 cm wide, available in two different versions: with Class A electric oven or gas oven” says Battilani. “The final aim was to conceive a product of semi-professional performances, capable of perfectly suiting a modern and non-conventional environment such as loft apartments”. A product endowed with undisputable character and aesthetic value, capable of “standing out”.

ENGINEERING
During the design phase, “four prototypes have been conceived – says Battilani – from which about 40 models have subsequently been created and tested before starting manufacturing them”. In the transition from prototype to finished product, the main steps of the design team were: identification and improvement of the weaknesses, and finishing of lines and volumes.
The first tests aimed at assuring safety, practical functionality, and product efficiency, with particular attention to cooktops, handles, and ignition knobs.
“As for cooktops, for instance, all joints have been removed in order to make grills’ positioning more stable and easy to clean. In order to facilitate usage ergonomics, the control panel is equipped with Soft Touch knobs that enhance grip and allow flame ignition and extinction with one hand. The oven door and handles have been stiffened through shims that ensure increased robustness”.
In the second designing phase, the cooking performances of the product have been tested. “As for the oven, we aimed at achieving perfect insulation and avoiding useless heat losses” says Battilani. As for cooktops, tests have been carried out on gas burners and grills in order to optimize efficiency and reduce emissions. 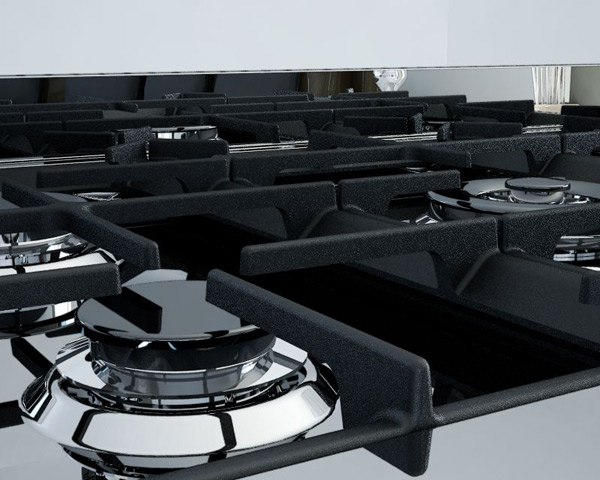 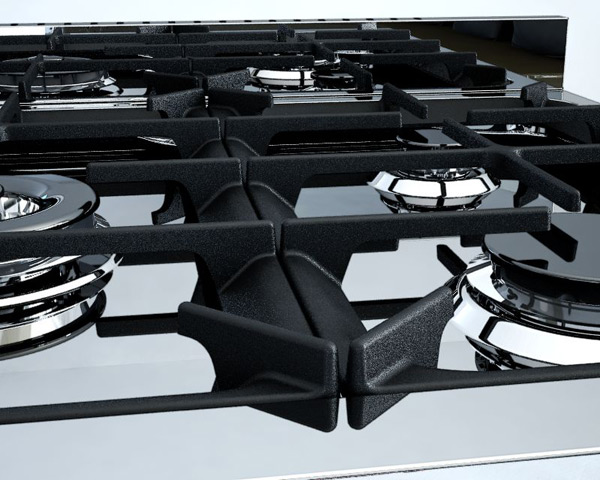 MATERIALS
The selection of materials for the Class Bompani cookers has been determined by the aesthetic as well as the performance needs. “The models – adds Battilani – have been entirely manufactured in shiny stainless steel, a material with a twofold function, both practical and aesthetic. Besides ensuring outstanding resistance over time, it also creates a fascinating game of lights and reflections enriching the cooker. Moreover, stainless steel is easy to clean: you only need a damp cloth for easily removing food remnants. Its practical aspects make it the most suitable material for food cooking operations”. As for cooktop grills, cast iron was chosen, due to its strength as well as for its extraordinary capability of conducting and maintaining flame heat. The oven interior was covered by a special Easy to Clean enamel to facilitate regular cleaning operations. 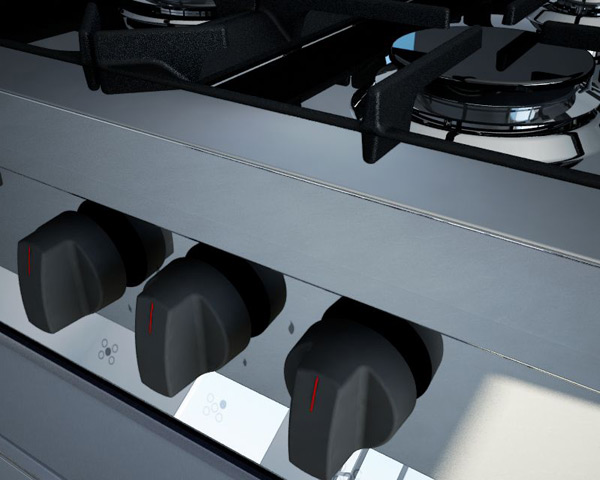 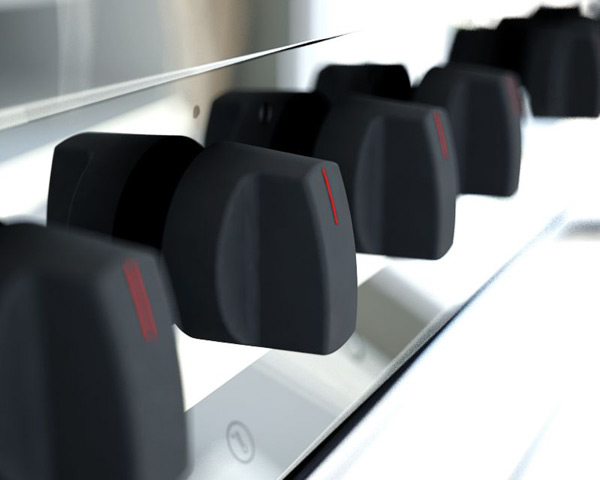 PRODUCTION
Launched in 2012, the Class line is strictly made in Italy and has a high-tech soul. Its flagship is undoubtedly the shiny stainless steel version, an aesthetic which is very much appreciated in Italy. In order to guarantee a more complete offer, colored models have also been conceived: “antique red, ivory, and opaque black: the cookers can be matched to our refrigerators with the same colors – says Battilani. However, in our country, colors are not very much asked for: consumers prefer the neutral color of steel or glass, fearing that stronger nuances may annoy, over time”.
Conceived in three sizes, 90, 70, 60 cm width, Class line is equipped with ovens with capacity between 74 and 58 kg, according to the model, electric grill, baking trays and spit. “Oven ventilation functionality is also included in gas ovens to allow those who prefer such cooking technique, to enjoy the benefits deriving from better heat distribution and to simultaneously cook on different levels. All this ensuring the highest performances to meet the most demanding needs of our customers” says the designer. 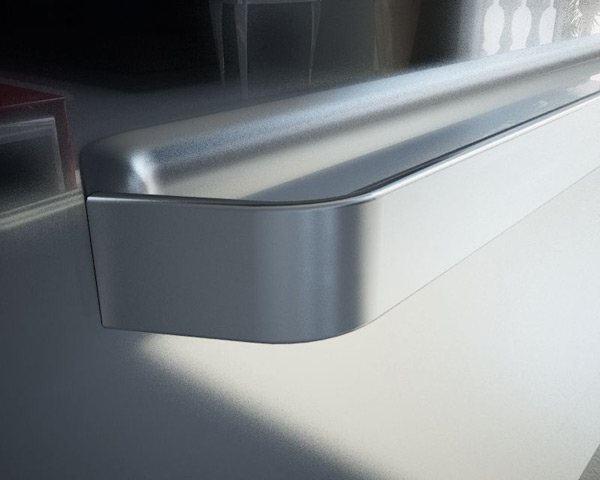