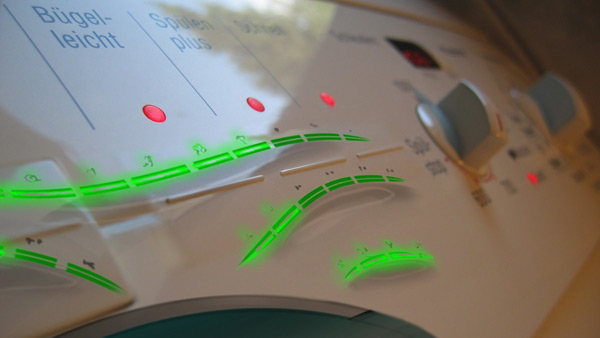 Innovative, intuitive and simple: the recourse to the touch technology to operate and to govern devices is more and more common, and after consumer electronics, it is the turn of white goods to go through the stages of this evolution. The Tochskin technology accompanies this change.

We have seen it for years in the terminals of shops, in car navigation systems, in medical monitors and control panels, but it was the iPhone that made it popular in 2007. Since that time everybody has understood that an innovative technology, already used for long time, in the hands of Apple has become the best and the most intuitive interface for the man-computer interaction in the history. And there is no doubt that the Apple Company has signed the future of the touchscreen technology. Today, we have already gone beyond the mass diffusion of consumer electronics: someone, in fact, has already thought of using it in car controls and in the control panels of household appliances.

How a touchscreen operates
The touchscreen is a control system composed by three functional blocks: screen, sensor, controller and driver software. The device is generally covered by a window housing the touch sensors (sensitive to touch), which can be made with acrylic panels or with clear glass materials. The touch area is continuously crossed by electrical current. When you press the screen, the pressure causes a change of the voltage and then of the signal, which is decoded by electronics and translated into the corresponding coordinate.
The sensor can be of resistive type (it bases its functioning on electrical resistance), capacitive (it generates a flow of electrons through the display surface) and infrared. The most diffused touchscreens are mainly two: capacitive and resistive. But what is the difference?

Resistive and capacitive touchscreens
The technology at the base of the resistive touchscreen is the oldest and also the simplest. A screen of this type is constituted by three layers of plastic material coated by conductive material and separated by a further insulating layer. When you exert a pressure on the external layer, you create an electrical contact with the underlying layer that allows tracing the contact point coordinates, which are communicated to the device. The advantages of this technology are manifold: cheap manufacturing, good resistance to collisions, operation at temperatures that range from -15 °C to +45 °C with whatever wetness percentage. Besides, the pressure on the screen can be exerted with fingers as well as with any other object, for instance with a pen-nib, leaving the display always clean and without fingerprints. This feature allows reaching a very high precision level, being the point of the pen-nib quite small, and allows the use of interfaces with very little control elements. Nevertheless, the brightness and the quality of images are affected by the presence of two plastic layers, and with the passing of time reactivity and precision are lost. Besides, since the external layer must be flexible, it cannot be made of glass but of plastic material, which makes it more subjected to scratches.
Also the capacitive display is composed by three different superimposed layers. The most external one is generally made of glass (less frequently of plastic), coated by a subtle layer of metallic oxide, which houses the capacitive sensors, that’s to say able to identify the capacity changes at the touch. The screen surface is crossed by a uniform electrical field that, at the contact with the user, undergoes a variation. The sensors positioned on the screen identify and measure the tension fall and detect the contact point coordinates communicating them to the device. In comparison with resistive screens, the capacitive ones, thanks to the glass surface, have higher brightness and sharpness, and are also less subjected to scratches. The use experience is more pleasant in comparison with the resistive touchscreen because it is not necessary to exert a pressure on the screen but the grazing is enough. Nevertheless, capacitive displays do not function if we use non-conductive objects and if we wear gloves; working temperatures are lower than resistive ones’ and art least 50% of wetness is necessary to operate well. Besides, glass, even if more resistant to scratches, is more vulnerable to collisions and risks of breaking more easily.

Plastic for capacitive sensors
Today the market is going towards touchscreens of capacitive type, even if– for cost reasons – their application is still prohibitive in low-end devices. For this reason, research is oriented towards the development of cheaper procedures and able, at the same time, of offering higher performances. Touchskin is one of the results of the research oriented towards this direction. Developed by the Austrian Plastic Electronic together with other partners (see box), the technology is based on the integration of an electro-conductive plastic film and of an injection-moulded coating, manufactured through over-moulding and retro-injection with resin. But let’s see in detail how it is manufactured.
All begins with a multi-layer composite film, similar to those used for packaging. From the same sector come also the central elements of the film transformation process, such as the “roll to roll” technique in various phases, also with mass-production, and the moulding and metalizing in more stages.
In the successive step, a metal layer composed by sensors and by a series of printed circuits is applied to the base film. 3D thermosetting and cutting follow, at the end of which you obtain the film inserts that are introduced into the injection press to be transformed into finished components. Once executed the connection with consumer electronics, they are ready for assembly.
Actually, the project goes far beyond the simple retro-injection of a film. Touchskin components must match functionality and good design, in order to create a universal interface without coming to compromises in the integration of the sensor functions. The solution is a sandwich composed by a sensitive and decorated film outside and by a bearing plastic structure inside.
This sandwich can be volume-manufactured without turning to other specific technologies and especially reducing the number of components and of the related assembly operations. It has been in fact developed a technical solution that provides for the integration of a phase of positioning and of automated fixing of two films in a single injection cycle, and the insertion of the channel where the melt material flows into the mould, in order to assure the safe sandwich moulding.

FREEDOM OF SHAPE AND MAXIMUM STURDINESS
The production of capacitive touchscreens with external casing made of plastic instead of glass offers notable advantages, first of which the possibility of implementing panels with free-shape surfaces, like those of car control boards (see box) or of household appliances. The sensitive film, in fact, besides replacing mechanical components, such as rotary switches and control pushbuttons, can be machined with deformation ratios up to 200% without making the conductive layer come off or break.
Besides, the possibility of coupling decorative and functional films results in a bigger number of possible configurations: the sensitive film, for instance, can be applied on the inner side of the housing with a standard process, while the decorative film applied on the external side allows customizing the household appliance design. Since the injection moulding technique permits to process different decorative films directly one after the other, the customization becomes possible already starting from batches formed by a single piece. Such flexibility allows producing in simple way also control panels visible in the dark without making use of specific technologies: it is sufficient to use a decorative film die-cut in such a way as to permit the light passage. The use of transparent resin for the support elements permits instead the integration of additional optical components, besides the possibility of lighting controls themselves.
Another noteworthy aspect is the sturdiness of components: as a matter of fact, the integration with the injection-moulded part protects the sensor from mechanical stresses (for instance oxidation, corrosion and wetness) that can determine the film detachment but also against environmental factors, as on the other hand confirmed by the overcoming of applicative tests carried out at a temperature ranging from -40 °C to + 85 °C.

HOW A CAPACITIVE SENSOR OPERATES
Capacitive sensors exploit the principle of the electrical capacity”, that’s to say the interaction between two points in the space, like two electrodes in an electrical field. The approaching of an electricity conductor object, like for instance the finger of the hand, can alter the lines of the electrical flow inside the electrical field. Capacitive sensors exploit just this effect: they detect the alteration of the electric field and they react with a tension variation that can be exploited to operate a control. The alteration of the electric field is such that it does not make necessary the direct contact with the sensor, since the latter, according to the sensitivity regulation, can operate also at a distance of about 10 mm. As the lines of the electrical flow field easily cross non-conductive solid bodies, the sensor can function even if provided with a coating layer having 10 mm thickness, as it happens for instance in presence of a plastic cover or in case of operation with gloves.

ABOUT PLASTIC ELECTRONIC
It is a spin-off of the Johannes Kepler University in Linz (Austria). The initiative of founding this activity starts in 2005 by Serdar Sariciftci who, after passing several years committed to the study of plastic structures able to conduct electricity together with the Nobel Prize Alan J. Heeger, at Santa Barbara, by the California University, he created the Institute for organic solar cells at the Johannes Kepler University. In addition to the research project carried out in the ambit of polymer electronic components, stands out the present feather in the cap of the company: the touchskin project, developed in collaboration with the mould maker and specialist in composite films Schöfer (Schwertberg, Austria), the producer of films Hueck Folien (Baumgartenberg, Austria) and the United States transformer Serigraph. To the injection press manufacturer Engel goes the credit of having diffused the technology in the last two sector exhibitions, with applications developed in collaboration with important end users of the automotive sector, like Magna Exteriors & Interiors.