Driven by bulk orders the German electrical and electronic industry has received 17.9% more new orders in March 2015 than a year earlier, according to data published by ZVEI association. Domestic and foreign orders rose by 22.1% and 14%, respectively. Bookings from euro zone customers increased by 13.2%, and new orders from third countries exceeded their pre-year level by 14.6%. The large increase in new orders in March has by far more than compensated for the slight declines back in January and February. Hence, in the full first quarter of 2015 bookings were 6% up on their pre-year level. Here domestic and foreign bookings picked up by 3.8% and 8.1%, respectively. Euro zone clients raised their orders by 2.9% compared to the first three months of last year. Customers from non-euro area countries even booked 11.3% more. 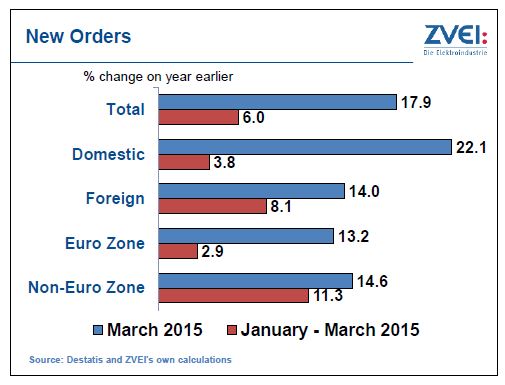 Production up, capacity utilization slightly down
Production – adjusted for price – of the sector’s companies has gone up perceptibly too in March of this year. Altogether it rose by 6.6% (again year over year) and, therewith, grew more powerfully than in January and February. From January through March 2015 output was up by 2.2% from a year ago. The capacity utilization in the domestic E&E industry has once again slightly declined at the beginning of the second quarter of this year. It fell from 84% to 82.7% of the normal full use level. The long term average value is at 83%. Production plans were weaker in April than in March. 22% of the companies want to raise their output in the next three months to come, 6% intend to curb it. The rest is going to maintain production at its current level. 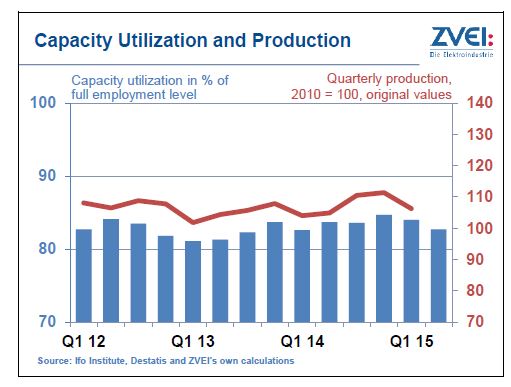 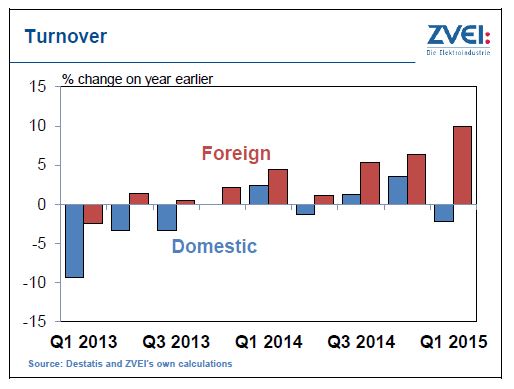 Business climate back on track in April
After the sideways movement in the preceding month, the business climate in the German E&E industry has further stepped up again in April of this year. Both the assessment of the current situation and expectations for the next six months to come have improved. 36% of the sector’s companies evaluate their present economic situation as good, 53% as stable and 11% as bad. At the same time, 31% of the firms reckon that their businesses will go up in the next six months ahead. 66% and 3% are awaiting steady and declining activities, respectively. However, export expectations have decreased somewhat in April. Here the balance of the companies’ positive and negative answers has fallen from 23% in March to 20% in April. 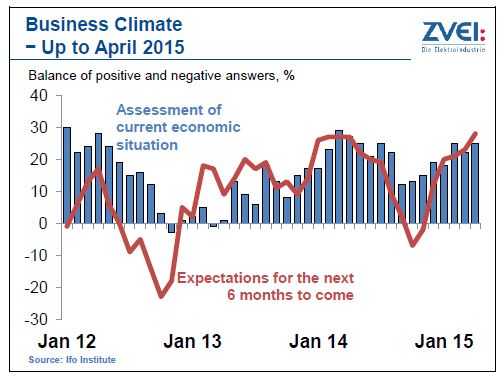