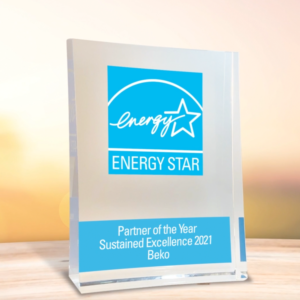 Beko U.S. has received the prestigious 2021 Energy Star Partner of the Year Sustained Excellence Award for its home appliances that prioritize efficiency, wellness and sustainability. This is the third consecutive year that the manufacturer has been awarded the Sustained Excellence honor and the fifth year in a row it has received the top Energy Star award. The Sustained Excellence award is the highest honor bestowed by the Energy Star program. “As one of the world’s leading manufacturers of kitchen appliances, Beko remains laser-focused on sustainability and empowering Americans to live healthy lives on a healthy planet – said Zach Elkin, Beko U.S. President -. When combined with various other product accolades we’ve received, this continual recognition by Energy Star proves that homeowners don’t have to sacrifice energy efficiency and the pursuit of health and wellness to get the industry’s most advanced appliances featuring the latest cooling and cleaning technology”.