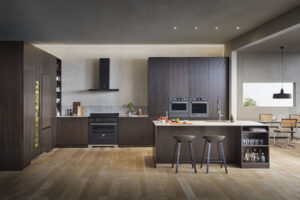 Bertazzoni, an Italian company specialized in the production of kitchen appliances, celebrates its 140th anniversary this year. Founded in 1882 by Francesco Bertazzoni, the company is now led by the fifth and sixth generation of the Bertazzoni family. With a history of innovation spanning more than a century, the brand has been able to evolve over time by combining engineering, design and the gastronomic tradition of the territory to which it is strongly linked. Bertazzoni has recently launched a new three-year investment plan (2021-2023) of 15 million euros for product innovation, digitization, the recruitment of new specialized figures and the development of strategic international markets such as China, where Bertazzoni has opened a new commercial branch in September 2021. To celebrate the 140th anniversary, a complete restyling of the Bertazzoni distinctive series was carried out, expanding the product range with new freestanding cookers, a line of new refrigerators and a selection of new hoods. An exclusive recipe book was also created.