Mr Cattani, can you tell us how the company was founded and what was SLIM’s initial core business?
SLIM S.r.l. (Società Lampade Interruttori Mercurio) was founded in 1973, initially by six partners: Pierluigi Cattani, Romeo Nardini, Carlo Restelli, Antonio Gordini, Giovanni Macario and Agostino Zambellini. Among them, some came from the Signal Lux company and already had experience in the lamp and micro-lamp sector. The business started with the introduction of special automatic machinery that allowed us to produce the neon lamp for industrial signalling and the mercury micro-switches. Initially, the core business consisted of the production and marketing of micro-lamps: this was a versatile component with multiple applications in the fields of small and large household appliances and civil lighting systems. The first headquarters was established near Monza and was later moved to Biassono, where it is still located today. As the years went by, the company underwent a management reorganisation that saw me and my historical founding partner Agostino Zambellini leading the company as senior managers.
In 1974, we decided to move from the production of the lamp alone to a broader offer with the addition of switches, leading to the complete indicator light, consisting of holder, lens and terminals. 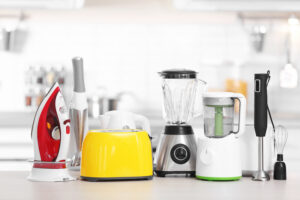 What were SLIM’s first electromechanical components for the home appliance sector?
The first components sold to home appliance manufacturers were standard neon bulbs, lamps with cables and then switches. With time, however, home appliances and their production changed and, as a result, even at SLIM, we had to adapt our components to keep up with the times and market demands. From the single light bulb, we moved on to “dressing” the lamp with different elements, up to the indicator light: the household appliance industry was moving in that direction.
Therefore, we no longer produced only the lamps, but also the different assembled components (holder, lens and terminals), thus providing a complete product. In the area of home appliances, the first appliance supplied was the iron (with about 90,000 pieces per month) with the TB standard signalling unit, mainly for customers in the Italian market. Subsequently, following participation in international trade fairs, the first requests from foreign markets also arrived, particularly from France and Germany. Our components were mainly sought after by companies producing small household appliances, e.g. egg cookers and kettles.

How have household appliances changed over the years? What evolution has SLIM witnessed?
We have witnessed the evolution of an industry that has gone from the production of basic, and purely functional, appliances to increasingly articulated and complex devices that required regulations from a technical and safety point of view. The first household appliances did not have many components, but as time went by, those who designed the equipment began to add some options, both functional and aesthetic, to improve the finished product. These options include light signalling, which was previously not considered important.
Today, the home appliance sector has changed a lot. In the last 20 years, the production of home appliances has been concentrated within large groups and several well-known Italian brands have also merged into large companies. It is a much more concentrated and dynamic sector that looks towards customised products with sophisticated design and smart functionality. The modern household appliance is electronic and connected to the internet to simplify household chores and help manage consumption autonomously and automatically.

So how has the components sector evolved?
The signalling sector itself in Italy was established on the wave of the household appliance sector. Its evolution has followed the change of a sector that, over time, matured and became more demanding both from a safety point of view and from an aesthetic and design point of view. While the first lighting solutions appeared very basic and primitive in terms of technology, with the emergence of the first safety and quality labels, signalling suppliers were also required to adapt and modify their signalling to adhere to this evolutionary process. From the point of view of technical and safety certifications, SLIM depended on North-European or North-American protocols as, at that time in Italy, there was still no certifying body for signalling appliances.
Initially, there was a change from a light bulb with a wire, to a switch and signalling component made with certified processes. Later, the signalling component became something more important within the creation of the appliance: from a simple on/off signalling function to a light component that provided added value to the device itself. Aesthetics also became more and more important: household appliances took on more beautiful and refined forms, to the point of becoming furnishing objects and, consequently, light signalling also followed this trend of aesthetic improvement. Just think that at the beginning of production, there were not many shapes and colours of lenses in the SLIM catalogue, whereas today we have a variety of more than a hundred shapes. The real change, however, came with the LED, a disruptive signalling element. The LED lamp has revolutionised the type of light offered: it has brought a different brightness and duration and many advantages in terms of aesthetics as well. 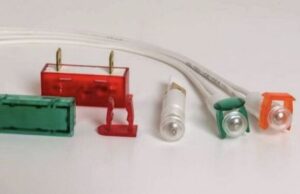 What are SLIM’s solutions for the household appliance sector?
In the beginning, the solutions presented were very simple: they were basic signalling units for washing machines, sliders for hoods, switches for small household appliances. The two directives that forced us to change and grow were, on the one hand, the regulatory advancement and, on the other hand, in parallel, the fact that we started selling to foreign markets; in fact, if we had limited ourselves to small Italian companies, our growth would probably have been slower. Today, most of the pages of our product catalogue feature devices applicable to the household appliance sector, and it is possible to customise and adapt each component according to the specific needs of the manufacturer.

Would the history of SLIM have been different if Italy had not been the cradle of the domestic appliance industry in Europe together with Germany?
The fact that we produce in Italy has certainly played a decisive role, especially when it comes to improving the aesthetics and design of our products. The evolution of the household appliance towards design aspects, typical of Made in Italy quality, has influenced the evolution of our components and directed us towards innovative lighting solutions with attractive shapes and colours.

The Cyber Resilience Act to address the safety of smart homes

Fight to wastes: the role of household appliances