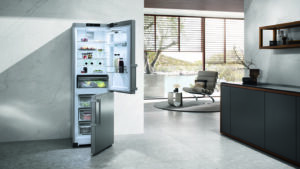 Sustainability and climate protection dominate the products that Miele is presenting at IFA. A contribution towards reducing food waste comes for example in the form of new free-standing refrigerators from the K 4000 series with the PerfectFresh Active system in which the combination of a temperature of around zero degrees with humidity and a fine mist of water keeps vegetables and fruit crisp and fresh longer. “In addition – the company explains – further improved smart cooking assistants and recipe apps, as well as intelligent energy management, ensure more sustainability in the household. And more new products at the IFA trade fair mainly focus on the kitchen, starting with a well-known, particularly tasty, nutritious, and healthy preparation method: steam cooking. In this field, Miele is expanding a model range which is already more than impressive by adding further models both at the top and the bottom ends of the lineup. In concrete terms, these are steam ovens which combine an oven or wall oven with first-class specifications with a fully-fledged steam cooker. Firstly, Miele is presenting new models with top features, such as improved cleaning convenience. Secondly, there is a new entry-line model series which reduces the starting price in this sought-after product category by around one-third, making cooking with steam more accessible to a larger target audience”. Miele is also presenting a new entry-level series of ovens, with a new design, significantly more features and offering better value for money. “And, in the booming market for induction hobs with an integrated downdraught extractor – Miele adds – there are new models at IFA which guarantee more efficient extraction than their predecessors – whilst at the same time being noticeably quieter”. The four new model series originate at Miele’s Arnsberg, Bünde and Oelde production plants. All models have been tested to last 20 years.

At the core of technological and sustainable innovation