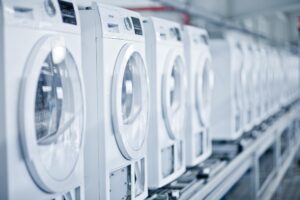 BSH is continuing to drive forward the decarbonization of its value chain using materials produced in a climate-friendly way. The company signed a Memorandum of Understanding with Salzgitter Flachstahl GmbH (a subsidiary of Salzgitter AG) to source green steel from a new production route from 2025. The steel will be produced by means of the new hydrogen-based production route SALCOS (Salzgitter Low CO2 Steelmaking). BSH has already been sourcing initial quantities of green steel from Salzgitter Flachstahl since 2021 with a reduction in the carbon footprint of more than 66 percent. This steel is already being used to produce mounting brackets for washing machines in the BSH plant in Lodz in Poland. Now, what is special about this green steel is the new production process that Salzgitter AG intends to use. Together with partners from business and research, Salzgitter AG has laid the foundations for almost zero-carbon steel production with the SALCOS program. The key elements are electricity from renewable sources and its use to produce hydrogen by means of electrolysis. The green hydrogen produced will replace coal, which is still being used at present in the conventional blast furnace process. This is made possible by direct reduction (DR) plants, involving the direct reduction of iron ore into iron in the solid state using hydrogen as a reducing agent. Using this technology, steam is emitted instead of carbon dioxide. SALCOS is thus following the carbon direct avoidance strategy to avoid the generation of carbon in steel production as early as the production stage. Salzgitter AG therefore intends to reduce its carbon emissions overall by 95 percent.