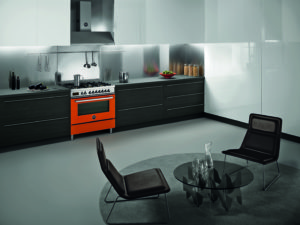 Bertazzoni ended the year 2018 with a turnover of 79 million euros and a high range offer enhanced by the launch of the new built-in products. The company recorded an increase in sales of +3.4% compared to 2017. All activities are concentrated at the Italian headquarters, recently renewed with an investment of 20 million euro, which has allowed the modernization of the production platforms and allows the manufacture of over 200thousand pieces per year. Bertazzoni realizes more than 90% of its turnover abroad. North America remains the main market: even in 2018, the company recorded an excellent growth rate of +29.6% in this area and a particularly significant performance in the United States. Very appreciable growth rates also came from the Latin America, Africa and the Mediterranean areas. Europe recorded +3.8% in turnover, while the Middle East confirms the moment of difficulty, due to the socio-economic context and political instability. A very important growth channel for the company is the contract, especially in markets such as the United States, the Middle East and Asia. “In order to cope with the increasing competition from emerging markets, we have chosen to concentrate our efforts on the premium products, going to ‘hit’ the luxury target, moving gradually from low value-added products and increasing the average value of the products – said Paolo Bertazzoni, CEO of the company -. Thanks to our engineering know-how and the attention to design, we combine industrial production with the tailor made production, typical of the Italian craftsmanship”.