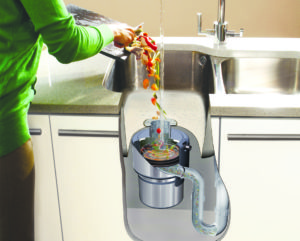 The food waste disposal has an impact on the environment. In fact, the food waste that ends up in the landfills produces methane, a gas 21 times more harmful than the carbon dioxide. A possible solution, suggested by InSinkErator, is the domestic garbage disposal that manages the organic residues by shredding and reducing them to a semi-liquid form that can be eliminated in the sink.
The use of this product is increasing: according to the data reported by InSinkErator, in the United States 50% of families own one, in New Zealand 34% and in Australia 20%. Confirming its commitment to the sustainability, InSinkErator recently proposed (on the occasion of the World Earth Day) seven rules with which every family can have a green behavior: limiting the use of plastic bottles, using smart taps, preserving food in an adequate way, disposing the food waste with a domestic garbage disposal, choosing efficient and sustainable components and furnishings, preserving the domestic heating by installing windows and other insulating tools and maintaining a constant temperature, turning off the electrical appliances not in use without underestimating the stand-by consumption.

Preventing a needless waste of resources