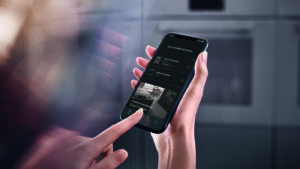 Miele proposes its new app with improved performance. As highlighted by the company, one challenge in redeveloping the app was, for example, to integrate a more complex range of functions in a way which is still user-friendly. From the washing machine to the Dialog oven, this app covers 26 product groups and increases the number of machine-specific use cases several-fold. In the course of this, Miele has further simplified the registration process known as ‘pairing’. The primary user interface is a dashboard in a low-key design with fast access to all machines. Navigation to further features, for instance an overview of all smart assistants, is intuitive. The hygiene assistant is a new feature which prompts the user to run a higher-temperature programme after a series of low-temperature cycles in the interest of hygiene. Besides, familiar applications have been retained and have even been expanded, including CookAssist and the BaristaAssistant. The recipe feature in the Miele app is freely accessible to all users and includes a whole host of preparation suggestions which are tailored to special features of Miele appliances (e.g. functions such as Moisture Plus and combination cooking). In addition, with Smart Food ID and Smart Browning Control, the new app for the first time includes pay-for applications for ovens which can be remotely uploaded (currently only for Denmark). This feature relies on an integrated camera inside the oven which recognises food.